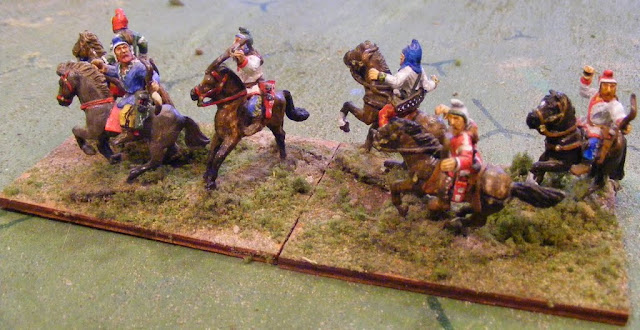 Hexes? Oh yes, he's back to that. Yesterday I got in another game of modified Basic Impetus, this time, not being interrupted by any veterinary emergencies. After some discussion, Ron and I agreed that we both wanted to pursue a modification of Basic impetus to use hexes and that we preferred units that fit 1 unit to a hex. Given the size of his Hexon hexes, we agreed that an 8cm unit frontage would work. This is the suggested size for 15mm figures with a suggestion that it might be suitable for 20mm, it also fits nicely in the 10cm hexes.

To adapt to the hexes, we deemed each hex to be 5U and rounded all distances up. This gave movement rates of 1 hex for heavy infantry, 2 for light infantry, skirmishers and medium or heavy cavalry and 3 for light cavalry. Ranges were 1 hex for javelins, 2 for effective archery. After more discussion, we agreed to have units face the angle rather than a hex side. This gives 2 front hexes where ZOC applied and 4 flank/rear ones. A wheel allowed a unit to change facing without leaving the hex. A "straight" advance was into either of the 2 front hexes. We tinkered with trying to force a zigzag advance but it was a hassle so we dropped it.
The charge bonus and retreat/pursuit moves were problematic.  Ron's solution which is not a perfect translation, offered some of the same tension. Melee contact occurs when a charging unit attempts to enter an enemy occupied hex, that is adjacent enemies are not necessarily in melee. If a unit's move takes it into the enemy hex then contact is automatic, if it just takes them adjacent then both sides roll a die, x 1/2 if infantry and the attacker must roll equal to or higher than to reach, otherwise they halt in disorder as if if they had fallen short in Basic Impetus. The same process was used to see if pursuers catch a retreating enemy.

We also partially adopted the discipline rules from Impetus, just rolling for discipline to wheel and move without disorder or to rally. This had nothing to do with the hexes but did some spice.

The game was the Crossroads  scenario from  CS Grant's Programmed Scenarios book. We have found that on his dining room table, dividing the points list by 5 gives a good size of game using the Impetus lists. In this case it was 300 points of Parthians (disguised as old Ral Partha Mongols but armoured lancers and horse archers by any other name.) facing a 300 point Late Pontic army on its first outing in over a decade. Historically it would probably have been Armenian but a very similar mix of troops anyway. The version of the table that Ron rolled up was one of the more woodsy versions which my Pontic light infantry heavy force appreciated. The terrain might also explain why my columns managed to converge on the crossroads before the 1st Parthian horse archer rode on to the table, or it might have just been the dice.

I meant to take pictures, but, the game was faced paced and exciting with several swings of fortune and the game was over before I remembered. The game lasted something like 14 turns played over 4 hours and went down to the wire. At the start of the last turn, both armies were 1 unit away from losing. the big difference was that I needed to lose either my last remaining heavy cavalry unit or 3 of my light units while for Ron who had suffered slightly heavier losses, any unit would be enough. 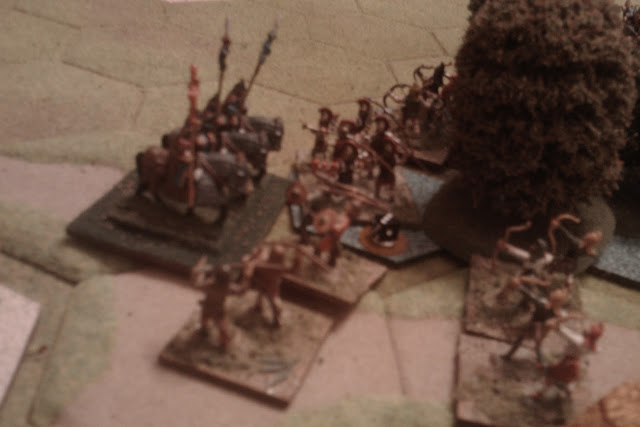 The closest thing to a shot of the battle, light infantry "luring" some Cataphracts into the woods.

Despite doing very well early on, my poor Ponts were taking a kicking from the Cataphracts and some Elite Horse Archers once Ron sorted himself out.  Salvation came from an un-looked for direction. Near the village, Ron had committed  some Cataphracts to eliminate some light infantry (very traditional looking Phyrgian natives supported by some javelinmen). These outdid themselves and despite a battering, managed to retreat back into a patch of woods, drawing the impetuous Cataphracts after them. A prolonged melee resulted (thanks to the penalty for cavalry fighting an enemy in the woods), slowly grinding both units down but eventually the Cataphracts lost a round and retreated.   The skirmishers, 35 year veterans, were too wily to pursue but having the next move, followed up with a shower of javelins, routing the remains of the cataphracts and rescuing the army.  (nothing like a 6 when you need it!) 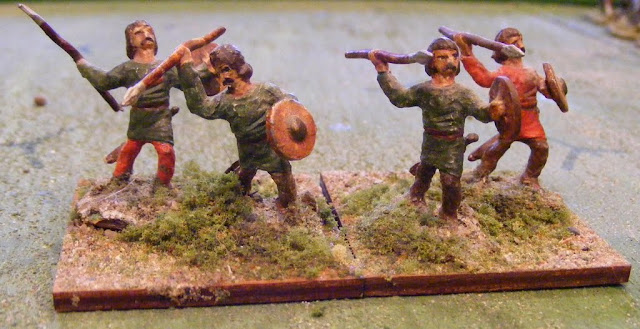 The Heroes of the Day: Garrison Sassinid javelinmen known locally as "The Hillmen".

When I revived my 25mm armies, my mind was on what we tend to think of as the Old School approach of large blocks of figures but recognizing various limitations, settled on medium sized units. Even at that, I found that I lacked the drive to paint up the 100's more of figures that my plans called for and lacked the room to deploy the full armies with room to maneuver if I had. I also found that the admirable plan of focusing on just 2 armies was just not sitting well.
From my perspective, an 8cm x 6cm unit allows just enough room for an attractive grouping of figures without requiring more figures per unit than I am in the mood to paint. It seems like a game with 12 to 20 units is as large as my mental and physical powers are able to enjoy these days regardless of the size of the units so the smaller units mean fewer figures for visual impact but the same game play and the smaller foot print means more room for maneuver. It also means that I can go back to having a selection of Ancient armies without overwhelming my shelf space. 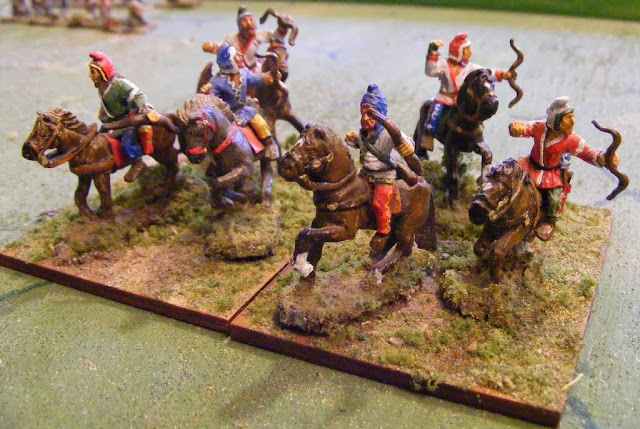 
The first kick at a plan is to assemble several 500 pt opposing armies as the basis of casual games or campaigns, A typical game will be 250 to 350 points drawn from what is available, 500 representing the maximum forces available. The goal will be to be able to do some seriously scaled down historical battles but to focus on Tabletop Teasers so light troops will be maximized and Elite troops minimized. I'll base the armies on the Beta Lists but with modifications as I see fit. The list is not finalized but makes good use of existing troops and molds.

The Glory That Was Greece.
The Big Battles of the Greek and Persian Wars translate well as historical games but for day to day teasers I like the Anabasis and Aegisilaus in Asia.
Three armies: Greeks using the Magna  Gracia list,  Early Achamenid with the late options, and a native hill tribes army. It would make sense to use my Thracians (Bythnian and various hill tribes) as I probably have enough but I am tempted to just use the Pontic list to build an Armenian army heavy on hill tribes which can cross over to the next campaign.

Enemies of Rome.
Armenian (probably based on the Pontic list) and Seleucid. This is primarily to face Ron's armies and make use of my existing Elephants. I need a couple more pikemen to flush out 4 units and may substitute a unit of hoplites to flush out the Seleucid Phalanx but the rest of the army exists from other past armies.


Rome vs Persia
This is a Far Future project.

But 1st I need to stage that refight of Thymbra.
Posted by Ross Mac rmacfa@gmail.com at 8:46 AM