That's Pteria to Herodotus. Whilst killing time on the web, I came across a site on an archeological dig in Turkey on the Kerkenes Dag. There is good reason to believe that this may have been a Mede stronghold during the war with Lydia. Now, I'm not likely to build a huge fortress city on a mountain but its nice to have a  name for the advance base of my Mede army. Herodotus calls in Pteria but I like the sound of Kerkenes Dag. I also like the green colour in this shot, very close to the colour of my table! 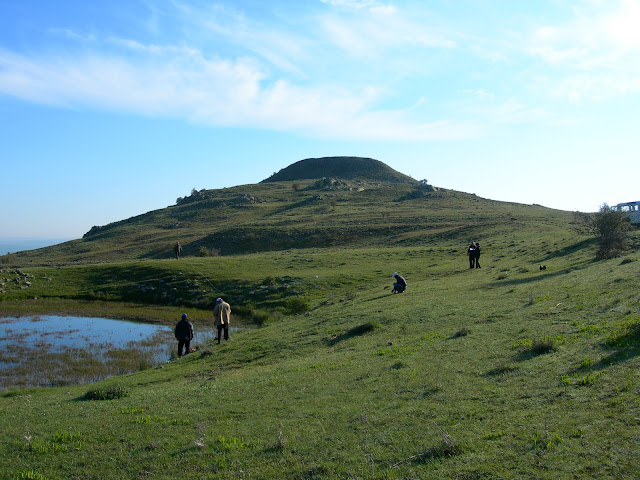 picture of Kerkenes Dag taken from the website http://www.kerkenes.metu.edu.tr/kerk1/index.html
btw for a minute I thought I had found a Google Books online copy of the volume of Hermathena containing Cobbe's  article "Alyattes ‘Median’ War"  but it turned out to be Issue XV when Issue CV is what is needed. Guess I have to wait another 100 years!

The Raffum Cavalry Regiment
The first full regiment of Mede cavalry has now been refurbished, reorganized and rebased. If memory serves, they were originally raised in the mid-80's as three 10 man units for WRG 6th ed (2 heavy, 1 light) and have since fought under WRG 7th, Hoplite, DBA, Armati and WHAB. Most of the figures are converted RAFM Hellenistic cavalry but there are a few converted Ral Partha Scythians and a new Garrison standard bearer. Roughly half wear visible armour, the rest might have armour under their tunics, or not. The new individual bases have been lightly coated in sawdust to soften the edges of the figures' bases and then painted to match my tabletop. This treatment helps the troops to blend into their surroundings.

Their original equipment did not include shields. The use of shields use by Mede cavalry is moot and possibly the figures look better without them but it was late, the new standard bearer had a round shield and there was this pile of painted shields recently removed from a unit of slingers and they will come in useful against some of the enemies that I might ask them to fight. The shields I have used are probably not the most likely shape and design, rather they were what I had available.

There are two main reasons for wargame cavalry to carry shields, the first is that the historical troops definitely carried them, the second is that the troops might have used them and the chosen rules reward their use. A Persian wargame army using WHAB falls under the later category, especially if it might be used as a stand-in for later armies. Since WHAB is old fashioned enough to give saving throws based on how much armour a unit is carrying, more is better as long as it isn't heavy enough to slow the unit down. The points assigned can be skewed though. A shield or a light armour will double the save chances for a cavlryman but a shield is only 1/2 the price of the armour. This of of course encourages players to choose Persian cavalry with shield and no armour rather than the more probable armour and no shield. Having both is better yet. Now this is all pretty much irrelevant  for my solo mini-campaign since I won't be counting points anyway but it bugs me none the less.

Did the Medes carry shields? Without getting too tedious, the evidence both written and pictorial would seem to indicate that at least some did at least some of the time. Why would they choose to use or not use shields in real life? The answer may be that a light shield is most useful to a horsemen engaged in hand to hand combat with other cavalry and to defend himself and his mount against missile fire but is an encumbrance to the bridal arm and makes control of the mount more difficult. When facing a Greek army, the opposing missile fire would not be a major issue and a shield would be insufficient protection to allow a frontal charge on a phalanx and wouldn't be needed if they were pursuing a broken one or attacking the flank or rear. When fighting an enemy with shock cavalry or one who relied on massed missile fire, a shield might have been more useful. The main armies that my Medes expect to face are: Lydians, Assyrians, Egyptians, fictional Alexandrian Successor, Romans and "barbarians". In all these cases, the shields will be useful if questionable.

Reviewing how my Mede cavalry works under the rules, I became aware of a problem. They don't have the oomph to be shock cavalry but if they ride up to opposing infantry to throw their javelins, they will be unable to avoid being charged except by fleeing with the possibility of causing panics and of never rallying. I have decided to deal with this in 2 ways. I intend to grant them the Parthian shot special rule which will allow them to ride up to infantry, shoot, then pull back out of charge reach. Against cavalry, they will still have to brace for impact or flee. Secondly, I have taken the step of deploying them as 6 man squadrons. These will be little threat by themselves and can be driven off by enemy missile fire but they will be very maneuverable (deployed 3 wide and 2 deep they will be able to "fast march" 24 inches per turn if they don't shoot and aren't embroiled with the enemy) and with several used together or if they can penetrate gaps in the enemy  to hit his flank or rear, they are a force to be reckoned with. On the other hand, if routed, they will be too small to bother my main combat units. The rules make standards useful, but only 1 per combat is needed so I have decided  to stay with 1 for each 2 units. This will allow me to field 4x 6 man units or 2x 12 man units.

So, without further ado we have: 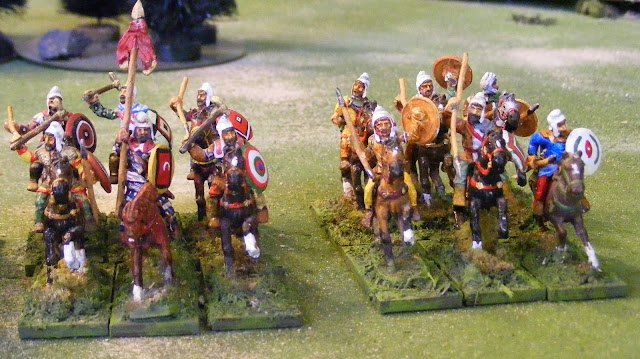 In an early post, I dabbled briefly in the background of my semi-historical Mede army. On the surface it may seem like a bit of a useless exercise but if I progress beyond stray scenarios the information may come in useful and in any event since I don't want to bother with points, it gives me a rationale for what units to deploy and how they should be organized.

One of the sticking points is that one of the few bits of information that comes easily  to hand and to mind is the organization of Persian (and presumably earlier Mede) armies into 10's, 100's and 1,000's, (not to mention 10,000's). As mentioned in earlier posts, this caused me some grief as it does not match convenient 25mm wargame unit sizes. It also does not explain how smaller forces would be selected (for example where one finds say 300 cavalry being deployed). An advantage of semi-historical gaming, especially in a poorly documented era, is that I can use my discretion and imagination to provide solutions with a clear conscience. After a mad minute where I contemplated fielding 50 man wargame units each with 10 x 5 man subunits, I settled on the following theoretical and practical organizations.

The smallest unit, the 10 man file is too small for me to work with on table, so I will begin with the 100 man sub-unit as the basis of my organization. Without worrying about niceties of ground scale, I flatly declare that 3 wargame figures or 1 chariot or elephant and crew constitute a COMPANY of 100 men.   Ten such companies constitute a REGIMENT. A full strength regiment is thus 30 figures. Three men don't look like much on the table (and aren't a legal unit under WHAB) so companies will not normally be fielded on their own, instead the regiment is divided into 5 SQUADRONS each of 2 companies or 6 men. This will be the minimum size of wargame unit. On occasion, a unit of more than squadron size but smaller than regiment size is needed. In these cases, 2 squadrons are formed into an adhoc unit called a WING.

Now, armies are rarely at full paper strength and there are two main ways to deal with this. The most common method is to maintain the number of sub-units but allow their strength to drop. This results in uneven sized subunits and so in some armies the administrative unit was not used as a tactical unit. For example, a battalion of 10 administrative companies might be fallen in and numbered off into 8 equal tactical platoons each morning, resulting in each being composed of men from several different companies.

Another, less common method, was to maintain the subdivisions as close as possible to full strength and reduce the number of sub-divisions when numbers failed. In particular, some later regiments maintained field and depot battalions or squadrons with the field ones being sent to war at, as near as possible, full strength. This is the system my Medes will adopt. Indeed, it now appears that the common practice in my army is to  send 4 squadrons into the field and hold 1 squadron back as a depot.(conveniently giving me my basic 24 man units with a rationale for smaller units).  The depot squadron is responsible for recruitment and training, looking after convalescent men, sending drafts to the front when needed and for rear area security.
.
District regiments are normally recruited in one area and armed alike. Auxiliary regiments may be composed of various contingents of mercenaries or tribal levies from the fringes of the empire. One common practice is to brigade 2 squadrons of skirmishers with a wing of light infantry equipped to either skirmish or fight hand to hand.

For the upcoming Lydian campaign, the following troops have been earmarked and are now completing their mobilization: 1 District cavalry regiment, 1 Auxiliary light cavalry regiment, 1 chariot wing, 6 District infantry regiments, 2 Auxilliary light infantry regiments, 1 Sapper squadron. All of these will be under the command of Rosius, Satrap of West Hantsia.  Pictures and details will hopefully be available for posting by next week.

Whether the Lydians conveniently adopt a similar system, as far as possible given their haphazard empire and reliance on seasonal mercenaries,  or go a different route, remains to be seen.
Posted by Ross Mac rmacfa@gmail.com at 6:11 AM 4 comments: