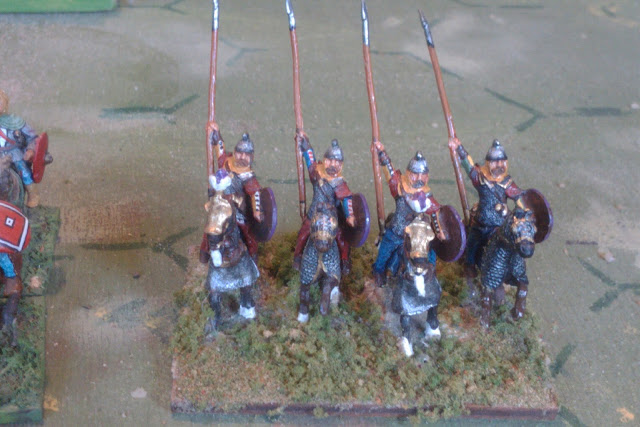 OK so its not the 18 man regiments I was playing about with 3 years ago but on the other hand having a single regiment make up the wing of an army never felt quite right and HEY I got a 4th Clibinari painted today!.

I've only had this 12 man unit in the queue for a year and a 1/2 so they count as a recent acquisition.  I thought 12 would be an easy go  but I primed 6 of them last summer, painted 3, and stalled. My Lydian Nobles also stalled at 6 last year and have been taking the field mixed with the, 6-out-of-12 painted, Skythian Nobles when I want to field a 12 man unit. Being able to field these 4 as a unit is encouraging, even if its not what I'm used to. .

Instead of comparing the visual impact of the individual unit, I am looking at the larger picture. For heavy cavalry, the individual units will be massed. Each small unit will retain its identity (and hopefully become labelled)  but they will operate en masse much the same as they would have as a single large unit and roughly the same number of figures will appear on the table. For light cavalry, the smaller units will allow much for flexibility to harass the enemy and thus feel more authentic. For my Athenian Phalanx,  10 tribes massed together is actually a better representation than 3 or 4 large units. Still, its a change of mindset from where I was at 2 years ago and I should be surprised if it rubs a bit here and there on occasion as I break it in.

Meanwhile, I was poking about in Shadows in the Desert and found a maddeningly vague but useful answer to a question I have been asking myself. "Are we sure the Parthians didn't use any decent infantry even when fighting in the hills?" The answer being several references on the role played by Mede hill tribes in repelling a Roman invasion. Aha!  So how were these Mede's armed  and dressed? Irrelevant  apparently, but we can surmise typical Mede pants, tunic and cap, some foot archers, some javelin or light spearmen.
Why should I care? Just that it makes an early Sassinid army seem just a little bit closer to a Parthian one, and makes a Parthian army more flexible for Table Top Teasers.

Now, thinking about Sassanids and Parthians brought Romans to mind, so I went to pull up the Garrison on line catalogue and.....ARRGGHHH!!! It seems that if I wasn't in the habit of bypassing the Home page, I'd have known that Rob is taking a well deserved winter break and has shut the catalogue down until March. Oh well, maybe by then I'll have funds in hand, be ready to buy rather than browse and have a proto-Sassinid army ready to greet them. In any case I hope Rob enjoys the break.