One Hump or Two?

Strictly speaking, I shouldn't really have a camel corps but there they were in the old Garrison catalogue and I've always had a secret thing for camels so when I discovered that they were available again, I indulged. Its been more than a year now since I glued them to their sticks and primed and started on them, then ground to a halt. Nothing stalls my painting like not being able to figure out out "I" want the figures to look like. Oh a simple matter for a young fellow, schooled to do what he's told, check your Osprey, order the right code from the right manufacturer and bin them if they don't match. Even easier for those who don't care, right 1 stand of camels. here are some old Ghaznavid camels, that'll do.  So here's what has been staring at me. 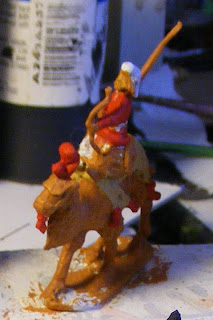 A Garrison unarmoured camel rider with bow, spear and shield, wearing an ankle length robe with long sleeved over tunic and a 3 lappet cap. But who are these guys? During Xerxes great invasion, Arab levies appear and most books and miniatures depict them as 1/2 naked, bareheaded savages with 2 archers perched upon their ride. Now whether or not any arab levies would have dressed up a bit when leaving the desert to campaign in the far northern reaches of Anatolian, its unlikely that there would have been Arab levies in a Persian army before the fall of Babylon.

Camels are, of course, not unknown on the steppes of Asia as witness the common name of Bactrian Camel.  A little early for a Bactrian contingent perhaps, but a bigger problem is that these, while smallish do appear to be dromedaries. I considered claiming that the blanket & saddle covered both humps but even I didn't buy it.

Now, as I said, I shouldn't really have camel's at all and I'm not talking about adhering to Army Lists. At the battle of Thymbra, which still lays in the future if you remember,  Cyrus will take advantage of the Lydian cavalry's never having encountered camels by dismounting pack camels in front of his infantry. The Lydian cavalry is thrown into disorder and Cyrus wins the day. I might field a unit of dismounted pack camels one day. They should probably be Bactrians but kneeling Dromedaries is what I have. 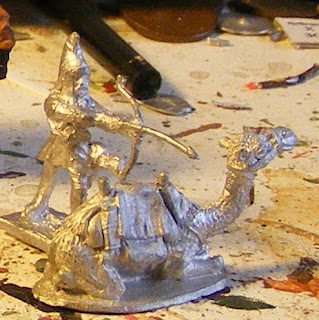 BUT, that still doesn't solve the matter at hand, now that I have my camel corps, how should I paint it? Several volunteers popped off their group stick and some individual experimentation took place to see what felt right while I pondered the possibilities. First the hats, arabs of the day are usually shown bareheaded and several of the caps had not cast quite right. A few strokes of a knife were sufficient to produce acceptable long hair. That's easy, I also have a thing for 3 lappet caps, so a mix perhaps. Long white robes sound quite Arab-ish and possibly the edge of the over tunic could be disguised but while one test figure had possibilities, it just didn't 'feel' right. Well, these guys aren't levies straight from the desert and they don't look like conscripted pack animal drovers so what about a small contingent of free lance mercenary Arabs? The officers have perhaps adopted some facets of Median dress assuming they aren't Medes themselves. The rank and file, while not going all the way,  might have spent some of their hard earned pay on new clothes, bought local as they wandered abroad. Slowly a picture and a unit character emerges. 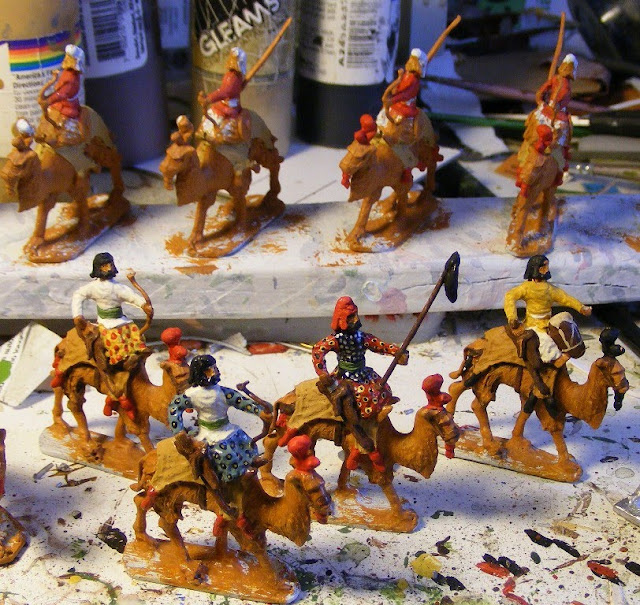 So there we are, the makings of my camel corps. I just need to finish up the 5 prototypes then get at the 2nd batch, aiming for an over all look of individuals with something in common. After all, Cyrus had to get the idea of using camels from somewhere!

Posted by Ross Mac rmacfa@gmail.com at 6:44 AM 2 comments:

We'll leave the fruit flies alone for today though. Hard to believ December has 1/2 slipped away without a post but still too much interference to have much to say. Hopefully soom I'll have time to talk about camels and Persian infantry, meanwhile Rob from Garrison has graciously scanned in the following illustrations of Phrygian weapons and armour for me. They are from the "1812 edition of Hope's Costume of the Ancients". 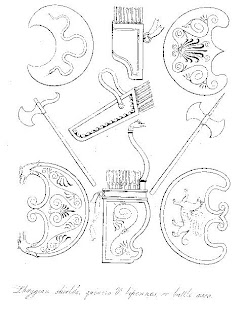 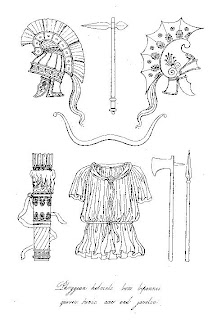 Posted by Ross Mac rmacfa@gmail.com at 4:14 PM No comments: