Having turned my attention back to Cyrus the Great, I recent;y came across an online translation of Ctesias's Persica. This describes (briefly) an expedition by Cyrus against the Derbices, a nation on the Syr Darya. These ambush him with a force including elephants sent by their Indian allies. Aha!

Now, these elephants probably looked more like your average, ancient Indian army elephants than they do the Hinchliffe Sassinid elephant kits that I picked up cheap last year (or was it the year before?) I picked them up, partly because I got a verry good deal and partly because I used to have a pair, a long time ago and liked them even if they weren't as impressive as my massive Garrison Carthaginian beast. The elephants were
one of several units that for reasons I have now forgotten, don't appear to have graduated from college with me. 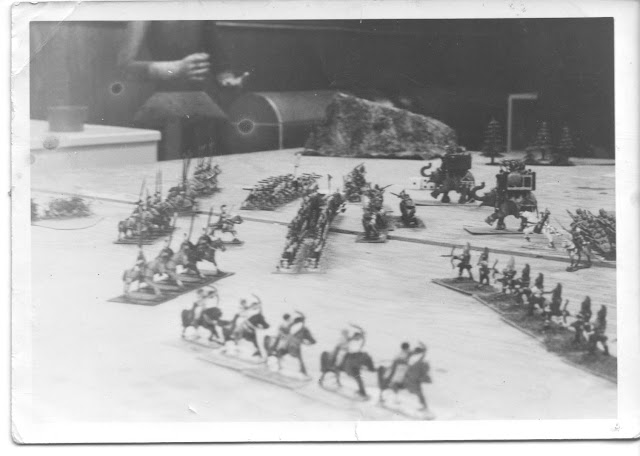 The original Pachyderms in action in the 70's and yes this is a repeat photo. There didn't seem to be much point in snapping a shot of a bagged elephant kit.


OK so that's not justification for an elephant IN my Mede/Persian army but it is justification to paint up some up for an enemy and nicely gives me a focal point for another enemy, One that could take part in a (rather stretched)  3 way campaign. I had considered the Saka or Massagetae as a 4th army but  they just didn't seem distinct enough and didn't seem to offer anything new for a table top game except the possibility of a swirling conflict of horse archers which is not particularly well suited to my new smaller table which I am planning.

Now I'm not exactly sure what the Derbices looked like or what their army was like and I'd just as soon not know too much at this point (unless it reinforces my imaginings!). A mysterious people in a far away fertile land of walled cities on the edge of a desert? What's not to love?

Given their geographic location, something similar to the Saka and Bactrians seems reasonable. I picture a largely peltast like force supported by archers and cavalry including horse archers, and possibly some chariots since they were still in use in India for some time to come. Dress to be similar as well with trousers, tunic and soft cap. Again, the end result will be troops that can be an enemy or be incorporated  into an Achaemenid army. Eventually some real Indian troops could be added for additional colour.

a) A Grek army, on its own or allied to the Lydians or as a source of mercenaries for the Persians
b) A Mede/Persian army including proto-cataphracts ala Cyropaedia.
c) A Lydian army including mercenaries/allies supplied by Babylon/Assyria and Egypt including arabs as well as various Anatolian troops including Phrygians, Lydians, Greeks, Thracians/Bythnians, and other tribes from the fringes. All of these could also serve as subjects and mercenaries in an Achamenid army.
d) The Derbices  possibly with gratuitous Massagatae allies as well as Indian ones and including elephants.
.
Posted by Ross Mac rmacfa@gmail.com at 9:00 AM 2 comments:

The Lydian Lancers begin to gather 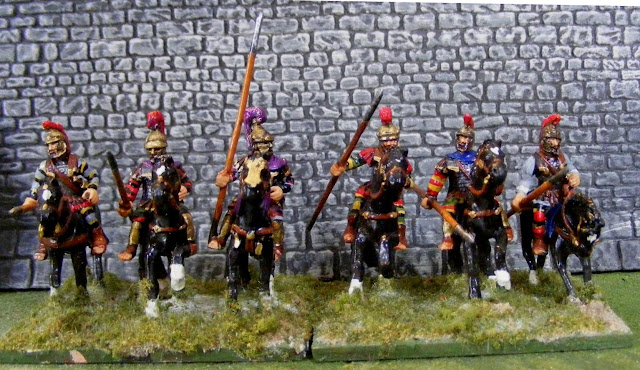 Having made progress on the Phrygian infantry component of my Lydian army, I decided to start in on the cavalry. As always, the information is sparse and largely speculative. Its very possible that the Lydian cavalry looked a lot like some of the armoured lancers on contemporary Greek vases in chiton, bell corselet and plumed helmet or they may have looked more like the Amazon cavalry and like the infantry figures that were the inspiration for the Phrygian infantry that appear in the Funcken & Saxetorph books and the Garrison Miniatures ranges..    .

Going the Greek route would be fairly safe and possibly make the figures more widely usable. However, I already have more Greek cavalry than I can normally use and I want this project to feel semi-mythical so the less common (and less Greek) the better. I made two decisions:

1) The clothes should match my Phrygian infantry in style to promote a sense of identity in the army and of "not being in Kansas" so to speak.

2) Since the Lydians had close contact (and conflict) with various kingdoms which used iron lamellar or scale armour, it seemed reasonable that they may have used it and doing so would make them look less classic Greek even with Greek helmets.

It was tempting to get back into shading on these but after doing the stripes on the sleeves and other finnicky bits my enthusiasm sank back to normal and the gloss varnish confuses shading anyway (and the lens as well!). 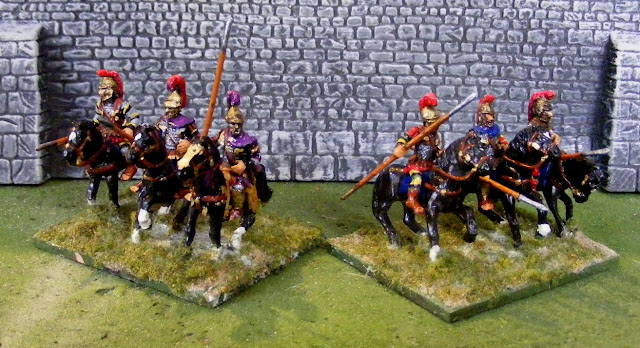 As planned, there will be two new units of Lydian lancers each 12 strong plus two units raised from existing Greek & Macedonian heavy cavalry, (subjects, allies or mercenaries perhaps) and various light cavalry.

Working up to Thymbra

Well, here I am, starting out on the 2nd year of the Median Revival.  I didn't get as many figures painted as I would have liked and didn't really get the campaign humming along properly but I did played more Mede/Persian  games than I expected even if they were all solo. I'm not ready to take another stab at the campaign, it didn't work well to drive painting and I need more stuff table-ready before I try again. So, what am I going to do?

Well, 2 of the games last year were refights of Greco-Persian battles, Marathon and Platea. Now its time to push the Lydians a bit so I am setting my sights on Thymbra. Evidence is shaky at best as usual but there is enough floating around  to make a workable game around what figures I have. The odds of me finding a few thousand allied Egyptian "hoplites" anytime this year is pretty remote so I suspect that there will be substitutions and concessions as usual.  I also want to fit the game on a 5'x6' playing area and play the game in 3 hours. This implies some serious compression, something on the order of 1-3,000 men per "element".

I should have a rough OB, a painting schedule. and a planned play date later this month. June would be the earliest date and I'm now thinking September or October as a more likely date and I might push it to the end of the year.  There will be other games in the meantime. New troops and rules will have to be tested if nothing else. I may stick with Gathering of Hosts but am tempted to try adapting Legio and may also give Basic Impetus a try.


and now, a gratuitous and completely  irrelevant shot of my 1/72nd plastic barbarian horde fighting amongst itself. (standing in as DBA Early Visigoths vs Late Germans) (and yes they owe their existence to the inclusion of scaled down copies of Marx's 25mm "Vikings")
Posted by Ross Mac rmacfa@gmail.com at 3:17 PM No comments: