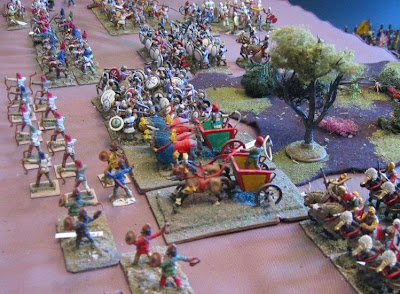 A decade and 3 rule set changes since their last real outing, my Persians come out of the box and take the field in 2006. Note the white shielded hoplites, in the background, these are RAFM multipart figures painted up as Carians then later washed with burnt umber over their flesh and drafted into my Armati Carthaginian army. What goes around....

OK so I have this ramshackle gathering of figures and need to organize it. Rather than the old blundering forward, its time to scout out the road ahead, analyse the "enemy" and form a plan. So, what do I really want to achieve?

1. Use as many existing figures as possible. The rest must be sold off or added to the melting pot (for homecasting). Now I don't 'repaint' other than occasionally touching up damaged figures but the RAFM multi-part figures are so useful that I may strip some of these and reconfigure them.

2. I want to end up with 2 and ONLY 2 matching armies suitable for playing out a protracted campaign. This may seem harsh but, for nearly 40 years now, I have been painting up armies primarily to face other people's armies, then they move or I move or interests change and I am left with another orphan. Even worse, time after time I get an army almost "complete" only to start another and rather than playing with the finished one, it sits on a shelf while I rush to paint figures and field "stand-in" units. For the next 20 years I want the figures on the shelf to have a reasonable chance of taking the field if only once every 3 to 5 years. In addition, they have to fit on one 11 foot shelf. That's it! The rest are taken and all painted troops must be on display. (ok exemptions are being considered for troops smaller than 25mm...)

3. Despite the above, I want to be able to field a small but credible opponant for any friend with an army from Europe or the Middle East between say 700 BCE and 700 CE. That sounds like a tall order but consider for example, a Saka army, if you replace the Noble cavalry with Cataphracts, you suddenly have a Parthian army, the variations in dress and tactics of the horse archers that make up the bulk of both forces are minimal.

4. The matching armies must be ones that fought more than a short, one sided campaign settled by a few big battles. Something like the Punic Wars where the 2 sides engaged in prolonged low intensity warfare inbetween the major campains is ideal. More than this, a little documented campaign would be best, a sort of plausible fictional campiagn between historical opponants. 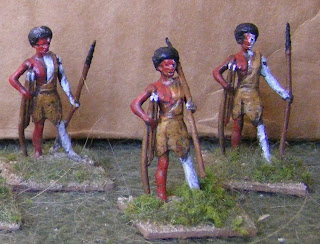 Something old, something new. The chariot on the far right is a Garrsion one painted out of the box in 1976. The other 2 are RAFM Successor scythed chariots painted this week. The drivers are RAFM figures, the crew are Garrison apart from the fella in purple, holding on for dear life, he is a Rose Prestige figure. Yes I know it should be 4 horses and scythes or 2 horses and archers, not both, but there is that marvelous picture in Funkens "Le costume et les Armes des soldats de tous les temps" which has been inspiring me since 1967 and besides, can anyone really proove that Cyrus was the 1st guy to ever put scythes on a chariot? I can see that photographing gloss coated figures is going to a challenge!

In order to see where I am going, it sometimes help to see where I have come from. My introduction to wargaming came around 1971 when I stumbled across a copy of Don Featherstone's Battles with Model Soldiers but after various explorations, copies of Charge! and Littlewars, I really became a serious (sic) wargamer while at the College Militaire Royal de St. Jean when I acquired a copy of WRG 3rd ed ancient rules and Simon MacDowall and I started painting and converting Airfix figures into mighty armies, well ok, into the puny advance guards of mighty armies. As my pay was slowly converted into Minifigs and Garrison miniatures, my armies, despite a gloss of tartan and some gaelic names, took the form that they have tended to follow ever since, shock cavalry supported by horse and foot archers and light infantry with spear and javelin and the occasional chariot or elephant. Those are my Valdurians on the right, the picture was taken somewhere around 1976 at the Old Fort on Ile Ste Helene in Montreal. 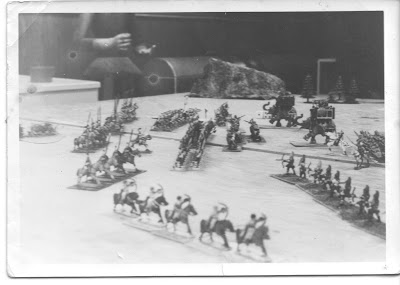 (note due to a digital (as in finger) error, the original text was deleted. What follows is vaguely similar...)
The wheels of time turned and fictional armies turned to historical ones, Arthurian (obviously going in small steps but Sword at Sunset has been one of my favorite books since high school and Rosemary Sutcliffe a favorite author), Late Roman (Hincliffe), Late Saxon (more Garrison) and eventually elements of the Valdurian army inclding Garrison Scythian foot archers and Sassinid slingers and javelinmen found themselves the nucleus of a Late Persian army when I added Skytrex hard plastic & Benassi metal hoplites, thracians and Scythians (in those days no respectable Athenoan army was without its contingent of Scythian foot archers!) then started converting RAFM Hellenistic figures. These faced off against Agisilaus and his Spartans until more hoplites and peltasts formed a late Athenian army . Some Republican Romans were painted up for a Legio game at Cangames and then the world turned again and Armati Carthaginian and Medieval Scots (more Valdurians) took the stage. Then came the 54mm WAB Interegnum. (must dig out some pictures of those). Finally about 3 years ago, I dusted off those old Persians and found that I could field a 3,000 pt Warhammer Ancient Battles (WAB) army. Just then, thanks to Rob Young, the old Garrison miniatures resurfaced so I added more and started back dating the army. 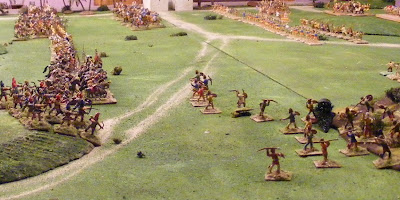 Note the archers on the hill in the left foreground, look familiar from the 1st picture?

So things are good right? Welllllll first I played some games against Gary McMahon's Assyrians (for example the Tabletop Teaser Getting Away With It) and started thinking about the Rise of the Persian Empire instead of its Decline and Fall. At about the same time I started unpacking old boxes from storage into my new gamesroom. What a mess, partial armies (various figures sold off), different basing, lots of broken stuff and orphans. What to do? 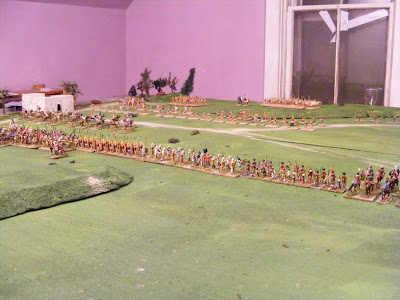 Next post: The analysis and formation of a project plan as I reduce this mess to 2 organized armies that can campaign against each other or proxy as enemies for any takers from 700BC(E) to ad700.
Posted by Ross Mac rmacfa@gmail.com at 12:38 PM 7 comments:

Lo he gathered his hosts and went forth to Blog

Ah fickle man! After stoutly clinging to my website as the public face of my hobby against the rising tide of the Blogisphere, I have succumbed. Or is it that Twittering (?!) is making Blogs seem old fashioned? In any event, I shall maintain my existing webpage www.lochsloy.ca indefinitely, especially as a repository for my free rules, past adventures and an over view, but individual projects will be tracked in 3 blogs. This one will chronicle my 25mm ancient wargame world, the next to launch sometime in the next 3 months will become the chronicles of the Red Queen, my fictional 40mm glossy toy soldier world and the 3rd, The Game of the Month, will launch in January when my Game of the Week - playing my way through CS Grant & S. Asquith's Scenarios for All Ages, (which should have been a blog), reaches completion. This blog will follow as I play through all of the Battlegames Table To Teasers.
Posted by Ross Mac rmacfa@gmail.com at 12:19 PM 4 comments: