On the Road to Shangri-La

Ok maybe not Shangri-La, that's a place of peace and serenity, no place for a wargamer. But a mystical city of the East, along the Silk Road. There was a time when I didn't see the point of building an ancient army if I wasn't up (at least a little) on the history and culture of the society that spawned it. Two years ago, I started to think about non-fictional imaginary kingdoms for a series of ancient games and campaigns. Armies that would allow me to use mostly figures that I already had, armies that were enemies for more than 1 brief, well documented war, armies that could be fielded for fictional but plausible campaigns where common historical knowledge wouldn't be constantly interfering, and above all, armies that could provide balanced forces for Table Top Teaser games.

My first kick at the can was based around existing Greek and Persian forces from the days of Xenephon. To escape the narratives of Herodotus and Xenephon, To add some vagueness and some figures that I had wanted back in college days, I pushed things back to the wars between the Lydians and the Medes and started adding a few troops but found myself fighting as many Classical Greek and Persian War battles as fictional ones.   I also recognized an increasingly strong itch for Elephants and Cataphracts. 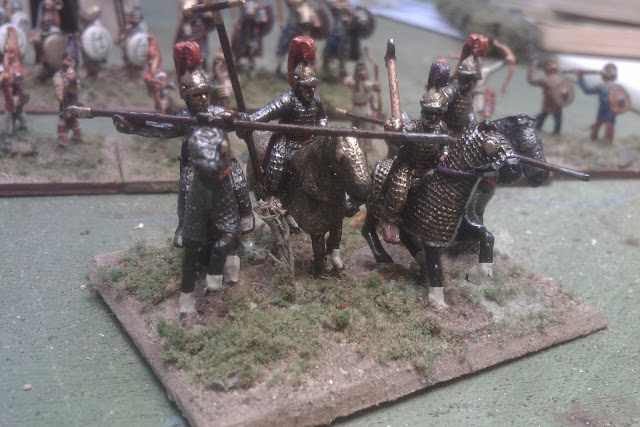 The newest unit off the painting desk: RAFM Bactrian Cataphracts with Seleucid Cataphract heads with a little animation and a couple of Hinchliffe horses.

More recently, after Ron and I started playing Impetus with his armies, I found myself looking for opponents for Romans, Gauls/Galatians and Parthians. In my Armati days, I used to field a Pontic army so reviving it was my 1st instinct. I was still looking for those elephants though and Ron handed back to me a score of pikemen I had lodged with him a few years back when trying to clean house.  I've never warmed  to the Seleucids, certainly not enough to read deeply and get a feel for what appears to be a prolonged foreign occupation enforced by an army with a bit of everything that you could think of to go on a wargames table, but they were enemies for all those named above and for Ponts, Thracians, and Scythians to boot.

It didn't take long when reading up a little on the Seleucids, to bump up against the Greco-Bactrian Kingdom, another wargame "army" that I had always dismissed as ephemeral if not etherial. A sudden closer look though showed me just what I have been looking for all my ancient wargaming life (apart from the bit where I used to want to know all about the real history, social as well as military). I've never seen an historical army which mirrored my old fictional Valdurian one as well. Even the history is reminiscent if you substitute Iranian for Celtic. Now, they didn't fight the Gauls or the Romans but they did fight the Parthians, and their successors, the Kushan who had fielded many of the same troops, fought Ron's other, lonely, army, the Chinese!  and of course, they could sub-in for Seleucids fairly easily.

At last, here is a land of cities and kings, (many of them at times)  at the crossroads of India, Europe and Asia, a land torn by civil war whenever its not being invaded by Seleucids, Skythians, Persians (Parthian and Sassinid) and others, with all the right troop types, in varying proportions, cavalry, heavy and light,  heavy infantry at times as well as light and archers, with just enough elephants to ice the cake. (and they wear trousers!) Its also a land where our knowledge seems to be limited at best. Just the place for fictional campaigns and small battles lost to history. Best of all, I just need to refurbish another 10 pikemen to have enough troops to field a small army.

So, now the idea of just 2 armies is long gone, the Greek and Persian Wars armies will stay as well as these later armies. But there is also no need now to buy hundreds of Romans. My Sassinids in waiting just found their enemy.