A Reviewing of Hosts 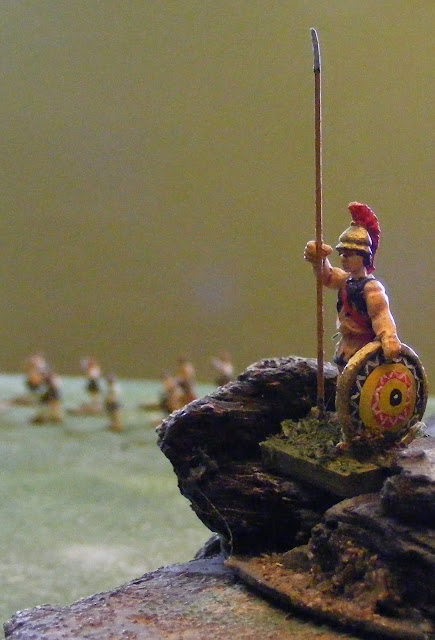 One of the first ancient pictures to appear on my Game of the Month Blog. January 2010, part of the build up to Marathon.

As the third (!!??) anniversary of Gathering of Hosts approaches in a few weeks time and I get closer to being able to start on the Syr Daria, 3 Kingdoms, 2 Rivers or Lost Outpost campaign or series of campaigns (obviously many details remain to be worked out), my mind has turned back to rules and thus organization. Like last year, I have gone back and read some old posts and battle reports to remind me of roads explored 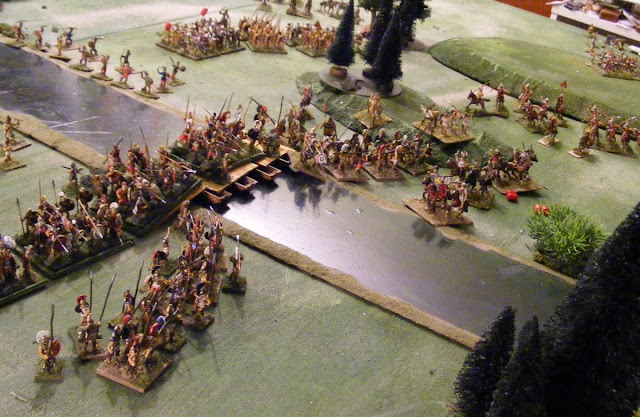 A Warhammer Ancients brawl over a bridge. Again January 2010


There have been a few detail changes over the three years but my real goal hasn't changed. Get something historically inspired but vague enough to not be historically hidebound going where all or most of my 25mm Ancients will have a role to play. I have upped the initial 2 armies to 3 and bumped it ahead by about 400 years, but the concept remains.

I had a fairly good idea of what I wanted the games to look like and when I decided to slide from obsolete Warhammer Ancients to home made that didn't change. Even when I got tired of pushing trays of single figures about, the basic look and feel was what I wanted. This got a bit warped when I had fun playing Basic Impetus and then a hex based variant of the same using 8cm wide units.  I haven't found the game as much fun when playing solo but more to the point, since the idea was to play Grant style Teasers with 1 unit = 1 unit with each unit developing its own character, reducing the number of figures from 12 or 24 to 4 or 8, it runs contrary to the original point of using as many figures as possible. Don't get me wrong, if I was starting from scratch, it would be great  I could reduce my shelf space by 2/3. Alternately if I wanted a whole bunch of little armies on the shelf, armies that might each get played with every two to three years if lucky, it would also be good and I seriously contemplated that option for a few months.

One option of course would be to just use a larger number of one stand units grouped together and it was in the middle of experimenting with rules for this this earlier today that it occurred to me that while this is probably more accurate historically, it wasn't what I had in mind and still wanted deep down. I don't want a bunch of nameless elements, I want long standing named regiments whose histories can be traced through the battles they fight. By adopting the 4cm bases that I have been itching to do for the last year, I will be able to extract vexillations for remote service under other rules systems while still staging the sorts of games that I had in mind. In deference to the table shrinkage experienced last year, I may compromise on slightly smaller units though; 8 cavalry or light troops, 16 infantry.

Having looked back at the original criteria, I find that most still hold. One difference being that I will now design for elements not individuals. There have been some radical experiments in peripherals but much of the core of the rules have remained and is still about right. I have added some new design challenges for myself which existed but were unwritten. The original rules handled these but the newer versions didn't really try.


The updated but not fully tested rules are avaible at left.

Platea from 2 years ago tomorrow. Another early Gathering of Hosts game.

Posted by Ross Mac rmacfa@gmail.com at 7:37 AM 4 comments: 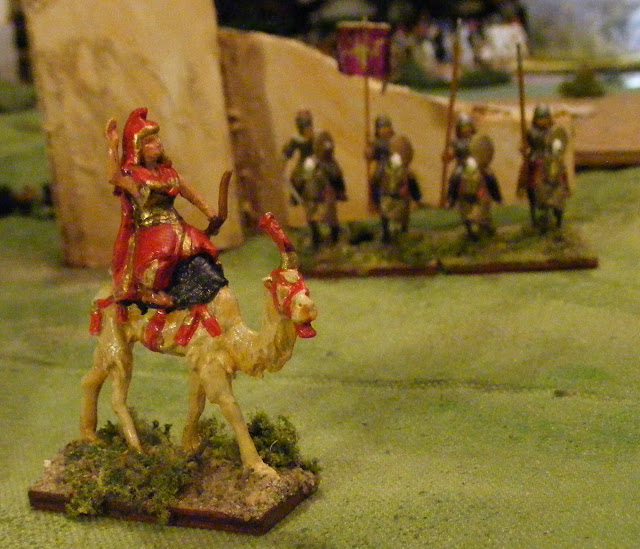 The young Queen Shahrazad, the Flame Queen, liberator and ruler of Marakanda. Her army is composed of the steppe horsemen amongst who she was raised and men from the city and surrounding farms of Marakanda which she freed from the oppressive rule of the Greeks and brought back to riches, and hillmen from the nearby mountains to whom she fled in her times of trouble and who now follow her loyally.

(Oddly, this is around the time that the Marakanda disappears from history for a few centuries, reappearing as Samarkand but that's another story).

Thanks to Rob from Garrison for the proto-Zenobia from whom she sprang,
.

I know, I was going to post ancient battle reports here but this one is over there.


Somewhere over on the Silk Road, a long long time ago, a Persian Satrap clashes with the forces of Marakanda (Samarkand in later times). 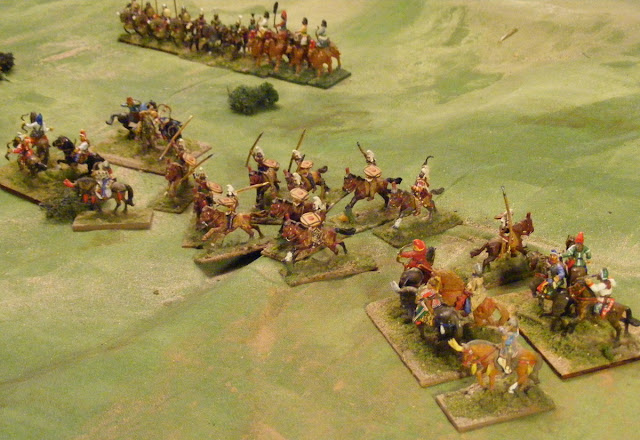 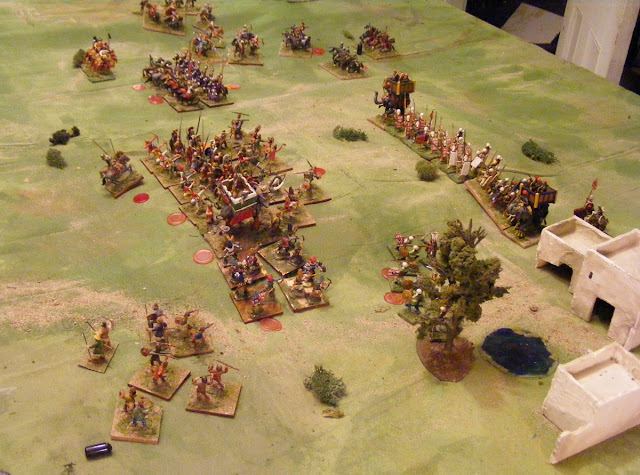 The battle, mid-game
Posted by Ross Mac rmacfa@gmail.com at 8:24 AM No comments:

I've been pondering basing again. There are some good points to the 80mm wide bases and some attraction to the idea of 1 base = a unit, buutttt..... its also quite limiting. Of all the 25mm ancient basing systems I've experimented  with over the last 5 years, the one I like the best for itself as opposed to the game that it enables, is the one using 40mm square bases with 2 cavalry or 2,3 or 4 infantry per base. I do have some cavalry who will need to go a bit deeper, 60mm for the galloping Garrison horses, but I like the look and feel and its fairly flexible. For example, apart from adapting to multiple rule sets, you can do road columns which are not convincing when 80mm wide. The plan will be to do 4 base units as a standard organization 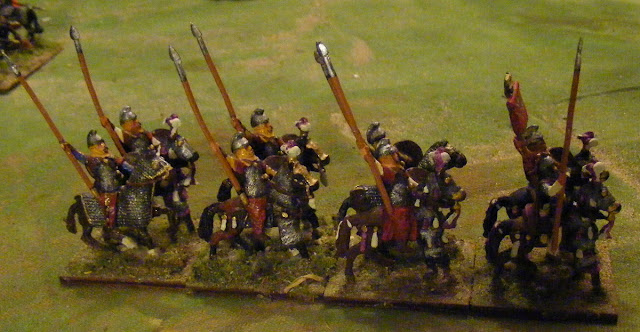 This happens to be 15mm standard for many rules which  won't help if playing some using standard 25mm  basing but that won't matter if both armies are mine. It does mean I can make impetus units out of 3 bases or if using 2 bases can match Ron's units for playing on a hex grid. I just tried it today using Comitatus and it worked great, well some units were on 40's from earlier experiments, others were singles on a 20mm frontage and I fudged the rest.  Getting ready for the game got my enthusiasm levels up high enough to finish 4 more Persian Clibinari and rebase them with the existing ones to finish that unit. 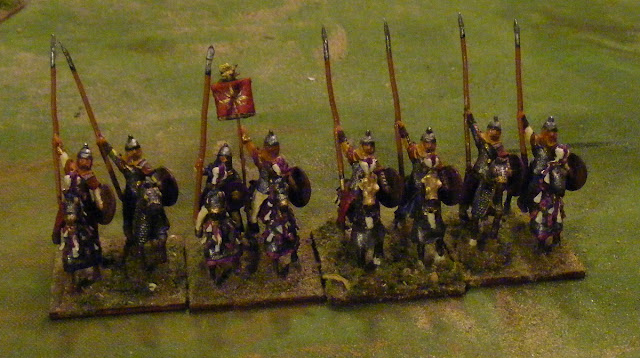 I also got a start at refurbishing my old Valdurian Royal Horse Guards to serve as Guards for the Queen of Marakanda.  I picked these Rohirrim lads up at the Minifig stand in the wargames tent at Aldershot the summer of 1974. My first metal cavalry. To keep up their status next to all those RAFM & Garrison horses I need to remount them, they've borrowed some PB horses here. 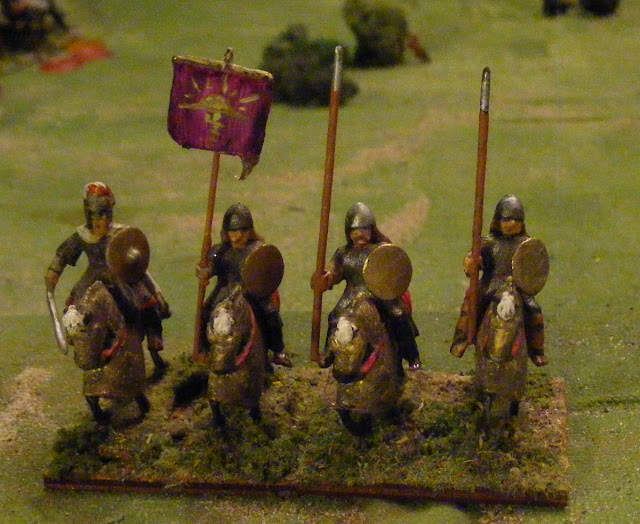 First time in battle in decades and another victory to their credit.
Posted by Ross Mac rmacfa@gmail.com at 7:13 PM 5 comments:

Video footage of the battle of marathon

Amazing what you can find on utube some days.

Why is it that they look more like my old Rospaks than anything else?
Posted by Ross Mac rmacfa@gmail.com at 3:53 AM 13 comments: 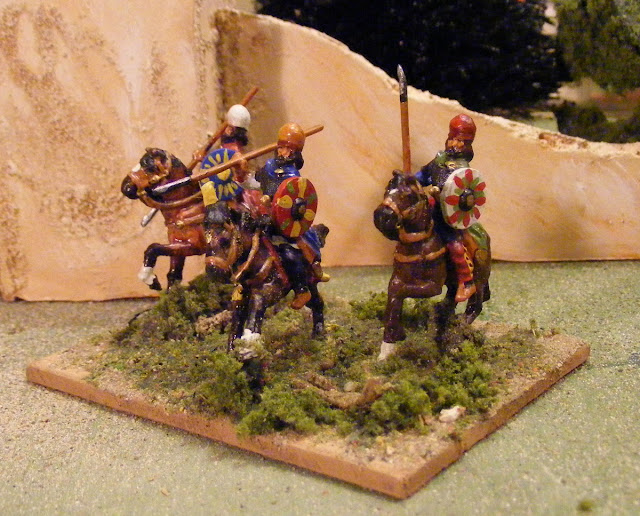