The Wargame of Thymbra 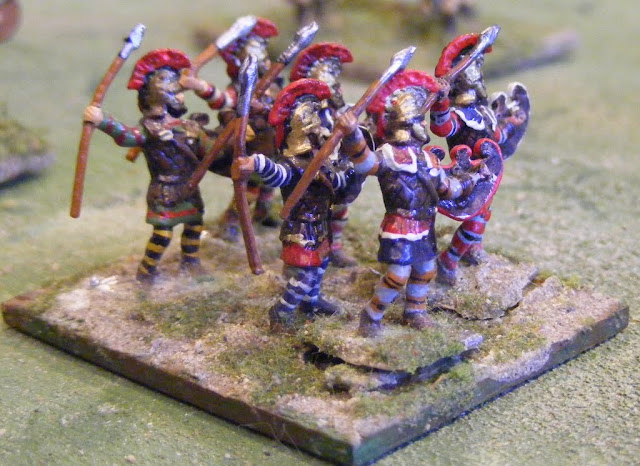 Garrison Phyrgian Infantry closing on the enemy with malice aforethought.

Since this battle hinged on the Lydian's attempt to out flank the Medes, I figured I should maximize the width of the table. Unfortunately I came up hard against two bits of reality. First, when playing with hexes the axis of the game matters. With my current configuration, my options are basically along the long axis or on a diagonal. Secondly, when I reassembled my table, I put one side on backwards so there is a fault line of  incomplete/mismatched  hexes in the middle. Must fix that but in the meantime, I went back to playing on basically half the table like I did for Marathon.

The armies as fielded were more than double the size of Basic Impetus armies. The game was big enough, in terms of units, to push my  battle fatigue limits but not breech them and there was just enough room to maneuver so all was well. I think I can mark this as a comfortable maximum for me. I could have  abandoned the hexes but if I stayed with the 15mm unit footprint and ranges it wouldn't have made much difference. If I had gone with standard 25mm unit foot prints and ranges, I would have used a few more figures but about  2/3 the number of units. The game would probably have been shorter with each combat being more critical. I'm not sure that would have been better. 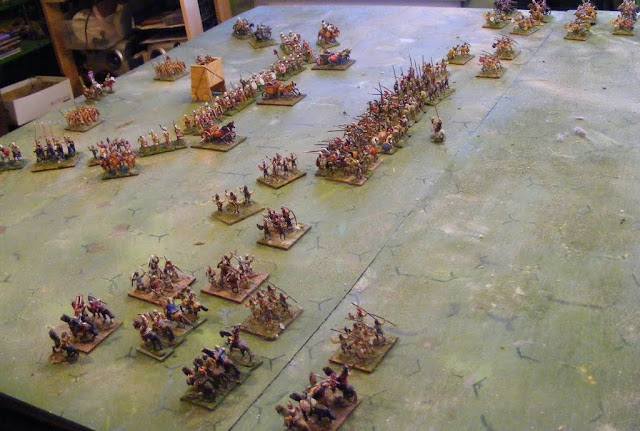 Columns of Lydian troops push forward on the left and right, planning to turn inwards and attack once in position.

As usual when playing a solo game based on an historical battle, I started by following the historical plans to the best of my ability. Essentially, the Lydians were advancing with columns of infantry and cavalry on the left and right and a phalanx up the middle. The idea was to pin the Medes while the cavalry turned the flanks and crushed them. The Medes, based largely on Xenophon's account,  were deployed with refused flanks, reserves of their best troops and some gimmick troops designed to disrupt the enemy attack or in the case of the tower, to provide additional missile support.

Scythed chariots are tricky things, especially in the defence. I decided that the best plan was to lose the initiative on the 2nd turn or win it on the 3rd. The fall back position was for the enemy javelin fire to miss. Yeah, not the soundest plan and it worked about as expected. Two of the three chariots were destroyed by javelin fire while the third was launched onto a hoplite phalanx and destroyed after causing a bit of disorder. Ok, no surprises there but I soon realized that I had a more serious problem. (Please excuse any apparent bias, but I was sitting behind Cyrus the Great).

The idea of the camels was to rob the Lydian shock cavalry of their charge bonus but the Lydians screened them with peltasts and bypassed them. Camels are only slightly more resistant to a shower of javelins than the chariots were.  Since I had given them an Impetus of 0 meaning that they couldn't charge, their options were limited. The right wing camels were destroyed but the left wing managed to extract their's and eventually redeployed them farther down the line, opposite the cavalry as intended. Watch for the resulkts of this move later on. 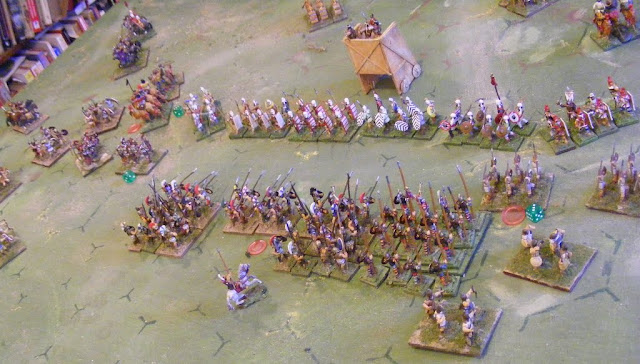 The lines close as javelins and arrows darken the sky. The Mede camels can be seen retiring in the upper right hand corner on one side while the ones on the left mill in disorder waiting for the final hit. In the center massed bowfire has panicked one of the phalanx units.

In the center, the phalanx that had been disordered by the chariot was now hit by massed bowfire which added to the confusion, in short, the rear 1/2 of one big unit panicked and ran. The rest of the phalanx charged forward but must have been a bit rattled as they were repulsed with losses all along the line. The levied hoplites and native spearmen are rated only slightly lower than the "real thing" in this game but it is a game where a little can mean a lot. Croesus rallied his center despite a continuing barrage of arrows, well most of it anyway, and prepared to renew the fight.

On the Mede right, the cavalry decided that with the camels gone, they might as well seize a moment and charge. The elite cavalry was immediately routed by the Lydians despite the brief advantage but the second unit got lucky, followed up its advantage on the next turn and eventually broke one of the Lydian cavalry squadrons, before being destroyed in turn. By now, Mede reserves were rushing to bolster the flanks. 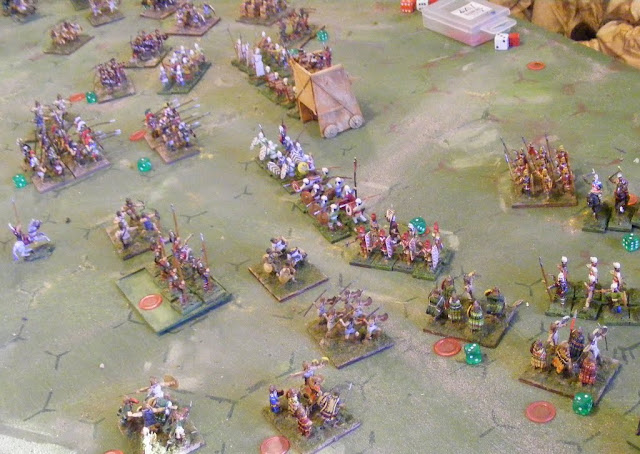 The Lydian center slowly crumbles under massed bow fire while the Medes are forced to commit their reserves early on the flanks.

For the next few turns there was little scope for maneuver and the only decisions to be made were stand and shoot or charge. The Mede infantry got excited at one point and charged a supposedly inferior unit of Thracians who cut them to pieces. A unit of Immortals suffered much the same fate (OH fickle dice!). The Medes restrained their ardour for the rest of the game and plied their bows and javelins to maximum effect.

On the Mede right, there was desperate fighting and Cyrus and his bodyguard were themselves driven back. Eventually both sides here were virtually exhausted though  the fight never quite ceased. In the center, the rallied phalanx drove forward on the left, driving back 2 units of Medes and breaking a 3rd. Only the bowfire from the tower managed to disorder the phalanx long enough for the line to be restablished.

On the right of the phalanx however, the arrow storm was too much and slowly the units faded away. Farther to the right, not all of the Lydian peltasts had been able to get into the fight and now some were recalled to plug the gap in the center. A fatal move, just as they left, the front line units finally gave way under the arrow storm leaving gaping holes and allowing the Mede archers to turn their bows on the cavalry. The Lydian cavalry who had had to ride farther since the Mede cavalry had not rushed to face them, found themselves with a choice of stand under a barrage of arrows or charge the mixed formation of camels and Mede cavalry. The fight was severe but eventually the Lydian cavalry broke taking the army with them. 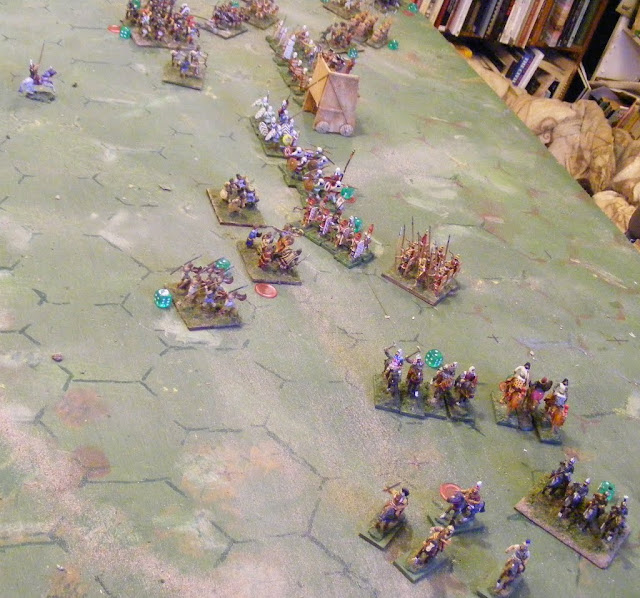 Just off the screen above, the battered remnants of the opposing left and right wings still face each other with not a single fresh unit on either side. In the center, the Lydian infantry melts under a hot stream of arrows from a bloodied and dented but intact Mede infantry line. On the near flank, the Lydians have collapsed in rout and are being swept. (The unit show retreating in disordered bring the army to their break point).

It felt awfully close at times, especially when little things would happen like the Immortals charging with 7 dice and getting no hits while the opposing Thracians threw 4 dice and got 3 sixes! In the end it was a solid victory however with the Mede's being barely 1/2 way to their break point though, to be fair, they had only 2 fresh units left so this was no walk over.

By and large, the rules worked well once again. There were a few turns where it was all combat and the turns were clicking over so fast my head was spinning, with very little to show for it on the table but I was tired after all the holiday stuff and still, somehow I found myself repeatedly replying "in a minute" to various requests to do various chores or watch some movie as I started just one more turn, again, and again. (Apparently both chores and movie managed happily without me.)

There were moments where it seemed like the dice and troop quality might be more important than Cyrus's deployment and his gimmick troops but on sober reflection, while the reserves didn't get to ride around the enemy phalanx and charge it in the rear, they were vital for holding the enemy's successes while allowing the counter attack on the winning wing, all without weakening the line anywhere like the Lydians did, and the camels, once properly deployed helped stem the tide on the winning flank while the tower's fire support may have tipped the balance in the center.

The camels didn't do the job initially, but I deployed them too far forward and there was only 1 unit on each flank. I had been unsure that the rule would work right. The usual description is that the Lydian horses wouldn't close so the Lydian cavalry dismounted and attacked. At a low level this isn't shown, the rules don't  force or allow the Lydian cavalry to dismount, they just remove their charge impetus but upon reflection, this is just about the right effect if you considered the Lydian cavalry as having dismounted to attack on foot without the minis being changed. It does mean that only units immediately faced by camels were effected but since units are never aligned in Impact and thus always over lap when 2 lines meet, it is next to impossible for the Lydians to avoid them all together. I would be tempted to deploy 2 units on each flank though. 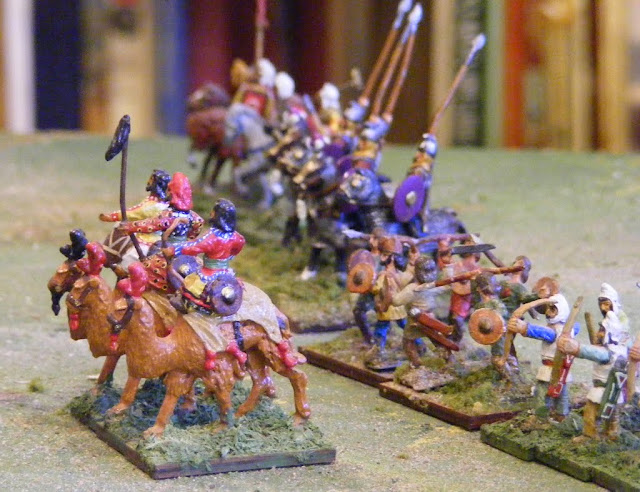 One other OB decision almost upset the game. I had forgotten how powerful light infantry can be in some situations. Since javelins, spears and bucklers seem to be popular Anatolian infantry weapons over the centuries, and since I had  lots, I threw in a dozen units to make up numbers, I'd have gone with more if there was room. Not only did they shoot up the chariots, they were able to more or less keep up with the cavalry, screen them  from missile fire, drive back the camels and hold the Mede infantry at bay long enough for others to force a decision (or try to). If/when I run this again, I think I would trade in about 1/2 of the peltasts for more spearmen and skirmishers. This would increase the odds of the historical gaps opening between the flanking columns and the center and decrease the offensive missile power of the Lydian army while increasing the staying power of the center.

A good game and a fitting end to my Lydian campaign.  In the new year, the focus will shift to the Eastern frontier of the Persian Empire.