It has been more than 6 months now since the last unit of 25mm Ancients left the painting table. For most of this time, there have been 10 1/2 painted 20mm Phyrgians sitting at the back of my table. For some reason, I'm not sure why, I just couldn't get a feel for them. I haven't been painting much anyway and so I let them slide when I did find the time and energy.

Just before Christmas, I got a sudden urge to convert the whole project to Sassinid vs Romans. Several days of  day dreaming and considering possibilities passed before I remembered that I was going to drain off any Roman impulse into the Prince Valiant 40mm project and began to dig about on the net for info on the Babylonians and Assyrians as a distraction. Worked like a charm, by Boxing Day evening I was relaxed, had time of my choosing and within minutes of starting to apply stripes, it was all good and so the first 1/2 unit of Phyrgians "light" infantry has emerged. 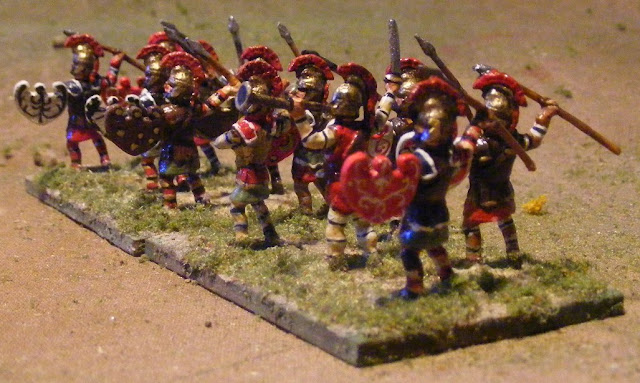 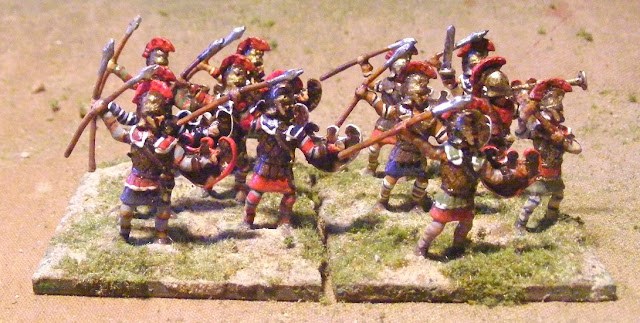 Those for an eye & a memory for such things may note that the single figure rebellion appears to have been quelled. I had a few bad moments when I was tempted to emulate the excellent 4 man 40mm sq bases that my 25mm ECW Scots have adopted but in the nick of time sanity reigned and I remembered how useful it can be to have something approaching "hobby standard"  for 25mm Ancients and how annoying it can be to have inconvenient non-standard arrangements. So it had to be single figures or 60mm elements.  My 40mm Prince Valiant figures give me "ancient" singles so its back to elements for the little guys. (Whew, glad I only rebased troops who needed it for other reasons!)
Posted by Ross Mac rmacfa@gmail.com at 6:54 PM 1 comment: