For the last 15 years, I have done my best to keep my ancient armies "compatible" with hobby standards, which meant, amongst other things, maintaining the ability to field 60mm wide elements regardless of how I based my troops. It hasn't always worked well for me and during that time, my Greeks and Persians have had, that I can recall, 8 opportunities to face some one else's army across the table, 5 of them against large 25mm figures using WHAB which isn't element based, 2 against large 25mm figures using Warmaster which neither of us were based for, and 1 using WHAB against a 1/72 plastic army based for WRG 3rd). The last opposed game was over 2 years ago. I don't see the opportunities increasing in the near future. Most of the large-25mm armies I might face aren't terribly appropriate enemies for my Persians anyway and the option to borrow an opponent always exists for away games. Hardly seems worth  the effort does it? 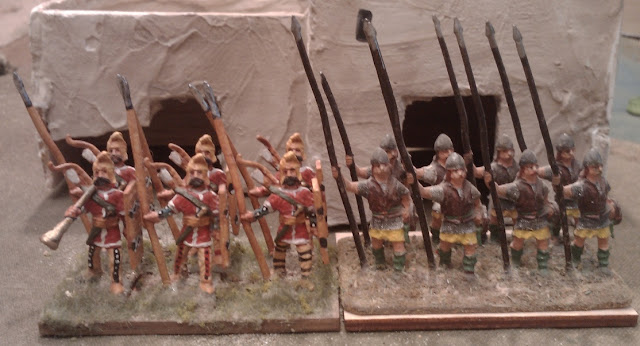 In amongst this, I have been looking at the old Grant book and looking over what's on hand with an eye to either refurbishing another old unit or starting a new one. My eye was caught on some of my older troops still based on a 15mm frontage and it brought me back to older days. My new units, in a mad attempt to harmonize 24 man  units with the option to go 2 deep or deeper while maintaining 60mm elements, and while accomodating some poorly disciplined spearmen, slid up to a 20mm frontage. Five mm doesn't sound like much but over the frontage of an army, it can mean an extra unit or 2 in the battle line, and now that I've cut my table down, that matters. It also happens to look more like massed troops.

So I am now contemplating heresy, mounting  6 heavy/medium infantry, 4 light infantry or 2 cavalry on a 45mm square base. Skirmishers will simply have their bases spread out. This will allow me to continue to field an average of 4 bases per unit so that they can go 2 deep or 4 deep but with the troops massed a little tighter with hoplites shield to shield.  I do have some heavy/medium infantry, which will remain unnamed, which cannot be squeezed onto a 15mm frontage but luckily, these can be squeezed comfortable into a 15mm depth so can be deployed 2 wide and 3 deep on the same base, so still 6 figures per element. Everyone is accommodated. That 2 of the new bases will fit inside a 4" hex is almost a coincidence that may or may not become important down the road. What ever the terrain is like, this will facilitate pursuing some Morschauser inspired rules and fitting the planned armies on the smaller table.

Not going to rush out and rebase the troops that have been recently rebased but I will try this out on the next units to be raised or refurbished. These questions of  basing, organization and compatibility have been  sticking points ever since I got frustrated with my experiment with singles and movement trays. Hopefully the way is now open to forge ahead again. My rules, my troops, my basing and organization and my not quite historical setting. Armies that only play at home, but guests welcome.
Posted by Ross Mac rmacfa@gmail.com at 7:19 AM 8 comments: