Last winter the Great King of Kings sent his Turanian horsemen over the border into the midlands. The foray was repulsed but honour demanded a reply. Normally this should be the duty of the Warden of the East but the Warden is aged and the King has once again called upon the Earl of Cowcross.

Prince Sala Mandur, Satrap of the Borderlands keeps a watchful eye on his neighbors though and is not easily caught unawares. A summons has gone out and the local nobles and garrison troops have gathered along the Great Road where it crosses the Little Phoam River.

I mentioned in passing in an  earlier blog post that I wanted to strip the rules down to just the troops and tactics used in this pseudo-campaign. I haven't quite got there yet but as I laid the troops out this afternoon I began to think seriously about and so the process has begun. 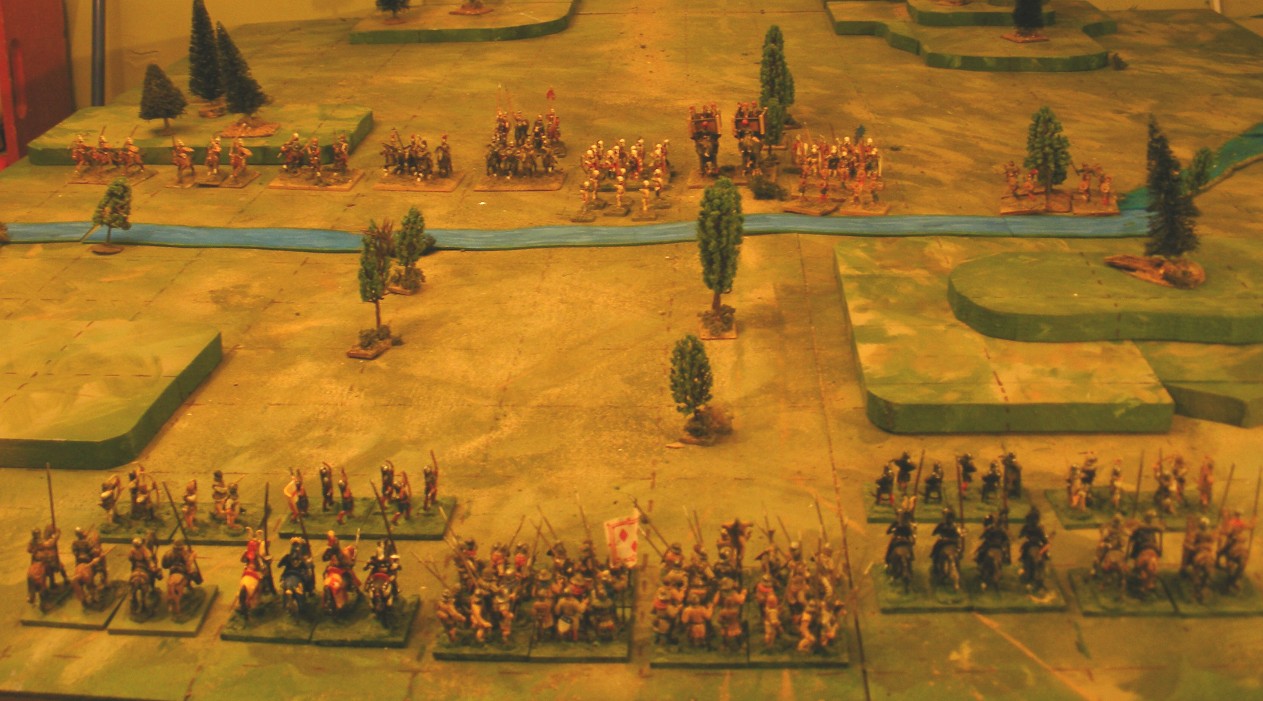 Here is the battle laid out ready to begin. The river is a minor obstacle, hills with 2 contours are broken terrain. The little trees are purely ornamental, the bigger ones are woods. I need to work on some woods bases.

The attackers, oddly enough, also have 12 units, 2 heavily armoured knights, 2 armoured lancers, 4  lightly armoured archers (not sure yet what that means, the rules really only recognize 3 armour levels...) 4 armoured spearmen.

Two turns have been played, on the 2nd the Turanian general managed to pull a surprise counter attack on his opponent....and this in a solo game!
The game will continue tomorrow. Good Ol Santa, suitably bribed, came through with a last box of Garrisons. A few Midlish Hobilars, some peasant levies, reinforcements  for the Great King: cataphracts, clibinari and peasants, and some Hyrkanian horse archers.

There was the usual quiet chorus of burbling "yes....yes yes" until I hit the Hyrkanians and thought "Damn, I knew I should have ordered dozens!"

Of course I hadn't because I don't really want a whole army of Huns-by-any-other-name. I wanted some horse archers to flush out the Federation or Alliance of "Barbarians" in the north.

I haven't got the details sorted but the Federation exists to provide a home for a battered mix of Celtic/Saxon/Fantasy figures, primarily early Valdurians from my college days. I had started to think of a Gothic sort of army but then remembered my old Rohirrim horse archers that I had de-armoured. I'm also minding that I have Prince August molds for "barbarian" infantry as well as a few left over Valdurian Celts.

So there we have the basis of the next player in the campaign. An army of Noble Heavy Cavalry backed by levies of warrior farmers,  horse archers and a handful of Valdurian tribesmen, driven into the mountains generations ago by waves of invaders.

I was going to wait till I had leisure to take some decent pictures during daylight hours but while I've been able to sneak a few moments to paint early in the morning or late at night,  leisure is a fleeting thing these days and I'm impatient so here we are.
Last week I added 7 or 8 new Westlands spearmen to bring me up to 2 double units. This week, upon returning from a visit to family,  I decided to paint up the Midlish Garrison  archers I got last year. The original idea was for them to be yeoman answering the call but the armour and tidy uniform look just screamed livery and this is mythical history so uniforms it was.

In one of my favorite books as a kid, the bad guy's troops wore his livery colours, Murrey and Blue. In college, I had a rather rich looking Minifig nobleman who has been wandering around for decades now with a trumpeter, drummer and 2 torchbearers  (there was a priest  but he appears to have gone off to some monastery). His entourage ended up in said Murrey and Blue even though the nobleman was a good guy who retired from exploring dungeons to play chess against his sword, I just liked the name and the colours.

So now he has a company of archers with billmen and lances on the way and a border tower to hold. Its becoming clear that professional garrisons hired by Lords, appointed by the King,  play an important role in the defence of the realm.