It occurred to me today that I have been incredibly lax and oddly incurious about the geography of Anatolia. This was brought to ahead when rereading Saxetorph's blurb on 6thC Anatolia and I realized that I could not pinpoint Lake Van and didn't know anything about it. So, off to google & google maps and now I know where it is have zoomed around the surrounding mountains & valleys (virtually speaking), know that it is a large salic, sodium endorheic (having no outlook) lake. Hmmph!  Goes to show what you can miss by not looking. Sounds like something right out of one of those Conan stories which is why this next bit took my fancy, a video clip of the Lake Van monster! :

Well, what land locked lake doesn't have one? The Ogopogo, Nessie, have long loved 'em all and here is my very own monster in the midst of my very own not very historical ancients campaign. Haven't figured out quite how to work it in yet but its nice to know its there.

Now what I'd really like to find is easy, free access to more pictures of Greek vase paintings, old ones.
Posted by Ross Mac rmacfa@gmail.com at 5:49 AM 2 comments:

Battle report is now posted at http://gameofmonth.blogspot.com/2010/06/teaser-8-mede-me-at-pass.html
Posted by Ross Mac rmacfa@gmail.com at 12:19 PM No comments:

I'm not sure that re-reading several volumes of Robert E Howard's original Conan stories was the most appropriate preparation for a vaguely historical campaign but it seems to have done the trick.  My original idea was to wait until both armies were fully ready with old troops refurbished, new ones painted, all units re-based to a new standard and so forth. It has become clear that this condition is unlikely to be met this year so I decided to start with what I had ready. The overall campaign forces are the same but units may not be used before they are ready and no stand ins will be allowed. As units are completed, they may be fielded (which may drive the painting as other units get eliminated).

I have also decided that, since time is at a premium and the mini-campaign a mere precursor,  the battles should be kept small, so I have effectively cut the scenario forces in  half. The paradigm for this round will be 6 cavalry or 12 infantry per scenario "unit". These will be grouped into wargame units as appropriate. This is an ultra lazy campaign with minimal background and paper work, If a unit is destroyed during a game then it is no longer available for future games, otherwise all units will take the field at full strength each game. Each side may choose units up to the scenario limit from their pool of units..

If I didn't mention it before, I have also decided that since I don't speak any ancient languages, I am not going to pretend but will stick to modern English as far as possible and thus will field  Generals, Regiments etc..
Not calling the Greek hoplites, hoplites will be tricky due to habit.


Each side had a theoretical force of 3 cavalry and 10 infantry regiments each of 24 figures plus conscripted pioneers if needed. The forces are as follows:

MEDES led by General Rosius in a light Chariot.

It is interesting the psychological effect that shifting the African troops has had. I am used to thinking of the Persians as a polyglot, multi-racial army defending the established power structure but suddenly it is the Lydians who have a multi-racial army representing the powers of the day and the Mede army is a coalition of related Aryan peoples sweeping down from the hills to establish a new order.

The Battle of the Pass was fought on June 26th and a report will appear soon on my battlegame of the month blog.
Posted by Ross Mac rmacfa@gmail.com at 7:02 AM 3 comments:

The following post was supposed to go up 3 weeks ago but I think I waited for pictures and then forgot it!

Belatedly:
The first infantry regiment has now been through the refurbishing mill. Originally I was just going to rebase the infantry but when dealing with individual figures, its a big help if you can easily identify which regiment stray figures came from. I don't buy suggestions that units were issued particular patterns of intricately embroidered clothing even if some items were handed down from above but I do want each regiment to have its own character as well as making it easy to identify which unit a figure comes from.

For the initial campaign, there will be 4 units of spara-bara, line infantry if you will. These are:

The Hyrkanian Regiment. (formerly fielded as Immortals, I have taken their rout in the last game as an excuse to down grade them and will order 'proper' Immortals in long robes to replace them)  Yellow caps, red tunics, garrison miniatures carrying bow, spear and shield. This regiment has an associated cavalry regiment with similar dress and weaponry.

The Raffum Regiment. A regiment of Iranians with white tiara, 12 archers, 12 spearmen. All RAFM figures.

The Scaran Regiment. A regiment of saka in coloured scythian caps, a mix of Garrison and Bennasi figures, all archers but the front rank will have spara (hats slightly modified and spears replaced).

Posted by Ross Mac rmacfa@gmail.com at 2:24 AM No comments:

At last the dust is starting to settle and I have resumed painting, including the last of the Garrison Phyrgians. Here is the Sardis Regiment in all its splendour. That thicket of spears just cries out for another on each side but they will have to content with existing hoplite allies for now. 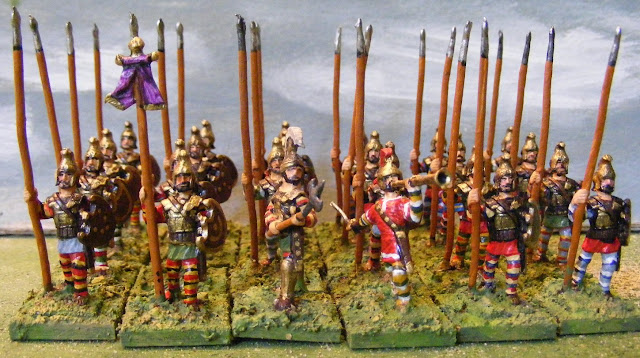 The Persian/Mede reorganization is also done leaving me with the Ecbatana Regiment of Garrison Medes: 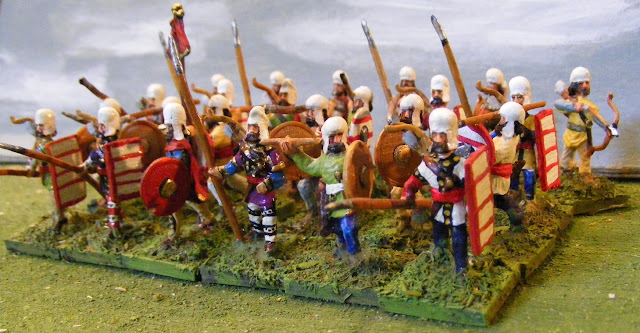 and the Persians, the Raphum Regiment using RAFM miniatures: 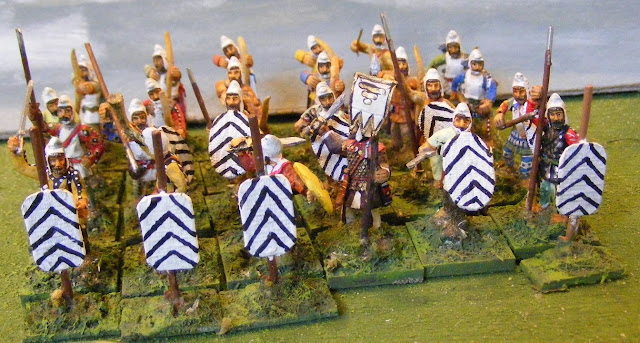 The armies are not up to their full campaign strength yet but I am ready to begin and no substitutions will be allowed. Any missing units can be added as figures are painted.
Posted by Ross Mac rmacfa@gmail.com at 5:10 PM No comments:

There is a unit of Lydians, 15 painted, 9 75% painted, and all the Persians are rebased and ready, well apart from the reinforcements that arrived  last week. Nubian archers that will be become Ethiopians and the Susa Regiment of infantry.  Some juggling will need to be done though. I have long pondered how and why the Ethiopeans are there and it suddenly occurred to me that Egypt was allied to Lydia and I intend to eventually include an allied Egyptian spear unit. It seems then that the Nubian and Ethiopean archers may well be sent by Egypt to fight for Lydia so I should flip them to the other army and raise a unit of Persian spearmen to replace them. Pictures of the revised Skythian, Saka, Hyrcanian and Ecbatana regiments will follow when I get otganized enough to take some..
Posted by Ross Mac rmacfa@gmail.com at 6:10 PM No comments: