When I hauled my Thracians put last week, I was reminded that the units were looking a little battered. This seemed as good a time as any to sort them.

First order of business was to remove the figures from their various basing systems. About 1/2 were on 60mm x 60mm 6 man elements, 1/4 individually based on 20mm x 20mm bases and the rest on old WRG 3rd-6th ed bases with a mix of 1, 2 or 3 figures per base, 20mm wide per figure but 30mm deep.
Once that was done, I stripped out figures with helmets or thureos. That left me with about 72 figures. Subtracting broken figures brought that down to about 60.  I considered a unit of javelin armed skirmishers but the need there is for Greeks not Thracians. Since these are RAFM multi-part figures, I decided to haul out the most suitable figures and re-head them with bare heads or petasos. That left me with 2 24 man units. For the last 25 or so years, my Rospak Thracians have been mixed in with my Ral Partha, RAFM and Corvus figures. I decided that it was time to separate them into two distinct units, 24 figures each. The remaining 24 figures, including a number of broken spear Rospak plastics, have been put aside as spare parts. 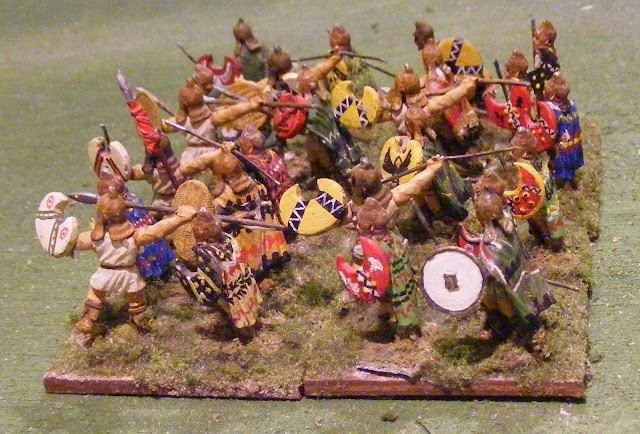 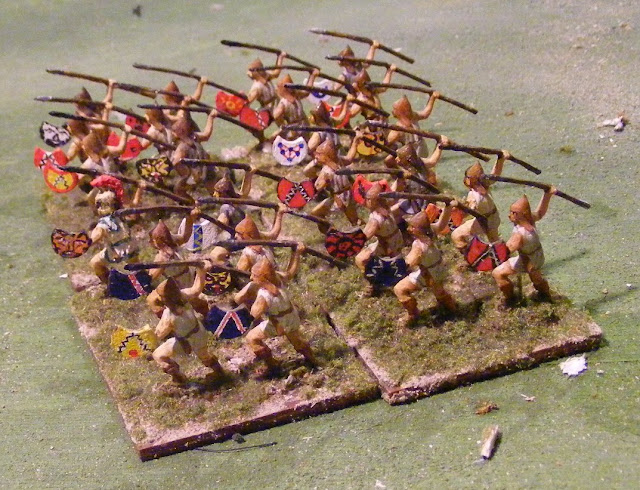 Rospak hard plastic Thracians.
While I was at in, I sorted out and based up 2 4 man stands of archers and 1 of slingers. The rest, mostly RAFM multi-part figures have gone into the spares box. 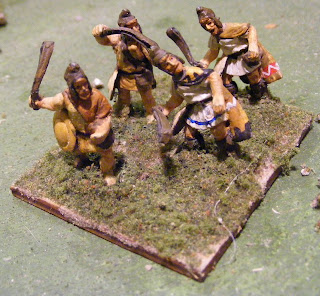 Seeing the Elephant (so to speak) 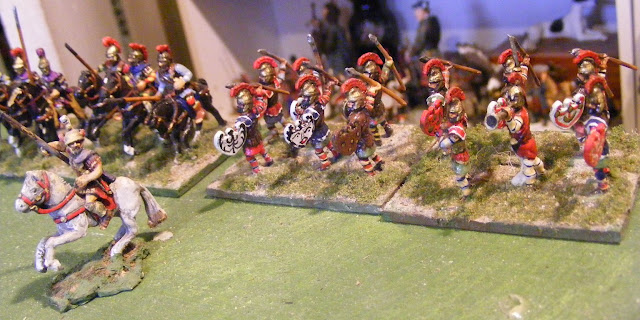 My new Lydian/Phyrgian cavalry and axemen have finally seen action during today's test game. The report can be found here.
Posted by Ross Mac rmacfa@gmail.com at 4:29 PM No comments:

I managed a quick playtest today and have uploaded a tweaked version of the movement rules. I have also just added some examples of optional special troop type rules. A battle report will follow this evening. 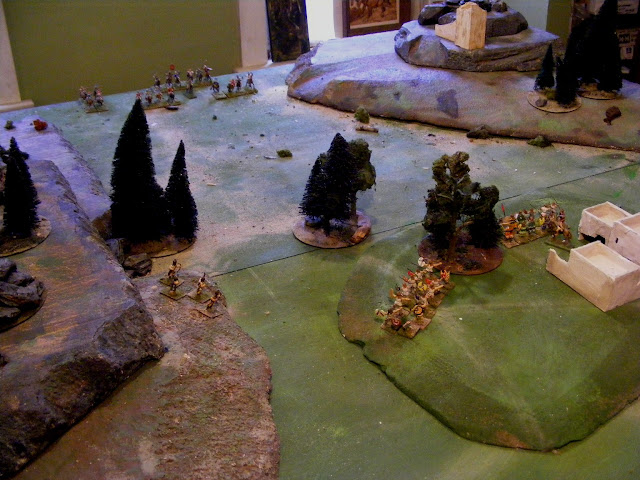 16)     OPTIONAL SPECIAL TROOP RULES
a)      Roman Legions. Each consular legion gets its own general.  If the legionairies are formed in 2 or more lines with each line being 1  rank of companies, then they may retreat or charge through other Roman infantry of the same legion. They also roll 1 extra die when charging or being charged by infantry. (The assumption is that Romans may either use the traditional manipular tactics or form deep in close order to repel cavalry or Barbarians but not both at the same time. Roman generals should choose appropriate tactics for their period.).
b)     Barbarians. German and Celtic tribes in particular had a reputation for fierces charges and a lack of stamina as well as a vulnerability to missile fire. These sorts of armies may declare them selves to be “barbarian” and receive a +1 die per stand in melee if charging or if being charged by infantry but may not rally.
c)      Cataphracts. Fully armoured cataphracts on fully armoured horses are immune to missile fire from all except crossbows, staff slings and artillery. In melee troops fighting them subtract -2 instead of the normal -1 for fighting heavy troops. However, due to the heavy fatigue they subject to, cataphracts take 1 less hit than normal so that regulars are destroyed by 1 hit and elites by 2.In addition, they may not rally hits.
d)     Scythed Chariots and other devices.  Scythed chariots, stampeding herds of cattle and other such stratagems were designed to break up formations rather than killing troops.  For each scythed chariot which contacts an enemy formation, instead of resolving melee, the opposing players each roll 1 die. If the attacker rolls higher then the attack succeeds other wise it is thwarted.  If the attack succeeds, then any company that was in contact with the chariot, including corner only contact, must retreat just far enough that it is not touching any other friendly company. If there were companies behind the retreating companies then these will retreat as well.
Posted by Ross Mac rmacfa@gmail.com at 12:53 PM 1 comment:

Google Docs seems to be up to its tricks again. Since I haven't brought myself to cancel my old Loch Sloy/MacDuff site yet, I have uploaded a copy there. It can be found here:.
http://www.lochsloy.ca/wargames/hosts.doc
Posted by Ross Mac rmacfa@gmail.com at 1:18 PM No comments:

An editor's job is never done

After a good night's sleep, I've had another look at the first draft of the revised Gathering of Hosts. Found lots of minor language tweaks, 1 change of mind and 2 big "too tired" omissions/accidental erasures.
For reasons that escape me now, I had deprived medium cavalry of the ability to shoot and move, it has been restored.
Light troops were intended to be able to self order a single move. That somehow got deleted. The idea is primarily that it will allow light infantry and skirmishers to move and fight effectively in broken and difficult terrain but also that fiddling with skirmishers shouldn't overly distract a general from the real fight. They still need orders to rally or double move.
and it was intended that a 1" fallback from melee could be followed up, that was the whole point.
The are a few other minor things but the updated version is now loaded.
.
Posted by Ross Mac rmacfa@gmail.com at 6:19 AM 7 comments:

A new year, a new version

The 1st draft of the revised Gathering of Hosts has now been uploaded to Google docs.

In brief, having decided to drop WHAB, a decision to reverse the slow process of converting to single figures and movement trays was not long in following. Despite having various Old School leanings, and despite the potential flexibility, the awkwardness of the single figures and the rules advantages of basing the rules on elements   have swung me back to how I have tended to approach ancients for 25 years, with a few twists.

I have not pursued the grid option but the changes were strongly influenced by Bob Cordery's work with chessboard wargames.  Essentially, the rules are now close to being an ancients version of the phantasm called the Square Brigadier (which rapidly turned into the latest version of Hearts of Tin).  The troops types are those already laid out in Gathering of Hosts, with the orders dice system, initially inspired from DBA though somewhat different in application and a simple hit system inspired by Morschauser, with my own twist on it all.

I am now chomping at the bit to get the Persians on the table. I want to start with something different but a refight of a Greek& Persian wars battle will have to follow soon as a benchmark test.

King Dariross The Obscure and the Art of Changing Horses

My original aims for the Gathering was to refurbish my OS 25mm ancients and get them on the table, making use of as many existing figures as possible and without adding too many figures. Still good aims and the logic that picked the Lydian campaign  as the best route to that goal is still sound. However, I missed a couple of key factors.

I wanted to paint up more Medes & Persians but in order to have a valid use for them,  I needed more Lydians even though I already knew that I was tired of painting Greeks and Greek type troops.  So, the Persians sit and wait while I work through a list of Greek-ish Lydians, or rather don't work through it. I wouldn't mind adding something different like a big phalanx of Egyptian spearmen for Thymbra as per Xenephon but the coffers are bare.

I did briefly consider Hyboria but I wanted to stay with the historical  fantasy approach and the Mede & Persian empire. Luckily, I don't need to scrap any of the troops I have done up or the campaign itself. After all we all knew going into this that the Lydians would eventually be conquered, it was just a matter of when so I can incorporate the Lydians, Phyggians, Thracians and Greeks into the Persian army as subjects and mercenaries and reserve the option to come back and play out the Lydian campaign later.

So its off to the mysterious East. Expansion of the empire is one possibility but there were numerous revolts and what better use for my armies than a civil war? The image in my mind are a series of walled towns, near the mountains, the Caspian on one flank, India on the other. Horse archers, proto-cataphracts, city militia and a few elephants.  hmmmmm

Another change since I started this trip is that my experiment with WHAB style individual figures and movement trays has failed. I'm going back to my old standard elements. Now that doesn't necessarily affect the rules that I started working on, but as long as I am making changes, this seems like the time. Having quite enjoyed playing some games with Bob Cordery's gridded wargame,  I think it may be time to have another look at Morschauser and have a fresh go at an element set.
Posted by Ross Mac rmacfa@gmail.com at 7:53 PM 1 comment:

There is no doubt about it, the Lydian army has stalled again.

Within 2 weeks I expect to finish rearranging my room and will have a "permanent" painting area again. At that time I expect painting to step up but there is a huge back log of various things and while I have 2 separate Lydian units 1/2 done, I am not looking forward to the prospect and not feeling an urge to field the Lydians in a game.

Perhaps I'll force the issue and finish the lancers or perhaps I'll troll through the boxes and see what takes my fancy. In any event, I need to get the Medes out sometime in April to test out the revised table.
Posted by Ross Mac rmacfa@gmail.com at 4:54 AM 2 comments: