The battle of Two (small) Armies

I did manage to squeeze in the remainder of the battle yesterday before trundling off to watch the final Hobbit, which I thoroughly enjoyed despite myself. Kudos to all involved!

But back to the game.

When laying out the troops I put on my Turanian hat and thought: "not sure yet what they're going to do but my Hillmen and Slingers are the only troops  any good on that steep hill so I'll put them there, my infantry to hold the road and see there are any openings for my cavalry on my right where its open".

Then I crossed the river and put on my Great Helm, thinking "the infantry is too slow to do anything but hey diddle diddle but there has to be something beyond a frontal charge. He won't expect, knights to try going over the mountain but I'll send archers over and the cavalry around it. A job for the Black Company. The rest of the archers and cavalry will just guard the open left flank though I don't really expect an attack". 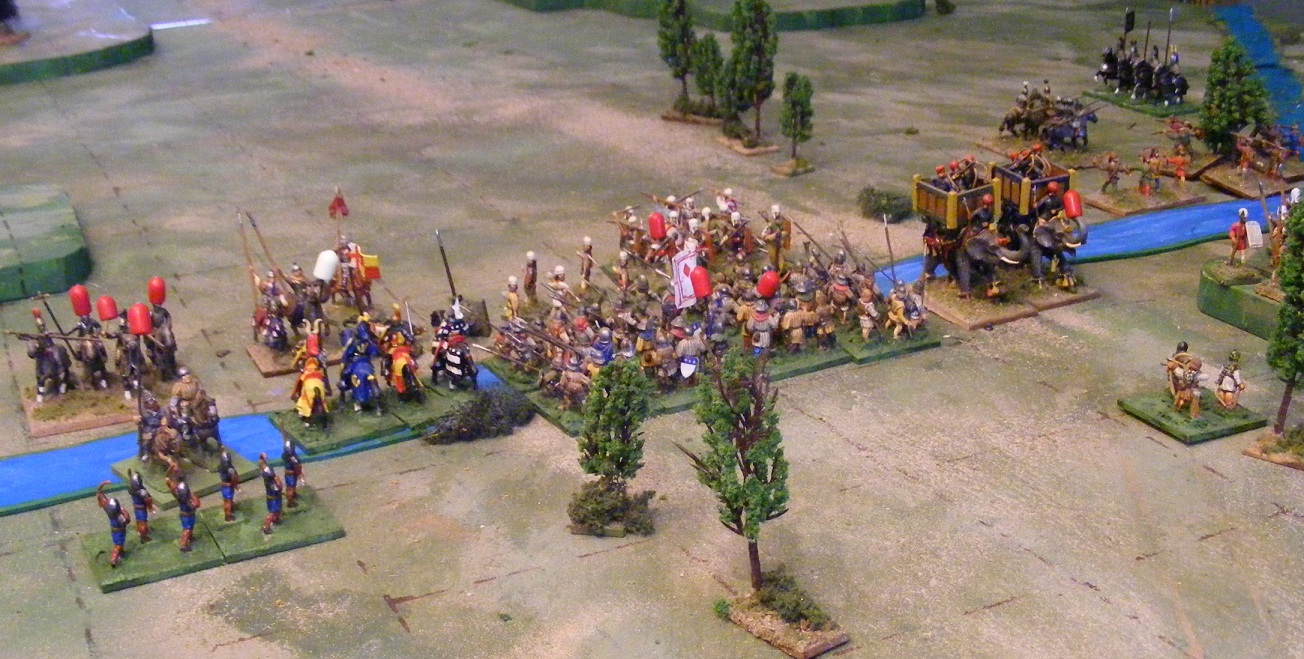 The Turanians won initiative about 8 out of 10 turns starting at the start. They chose to let the attackers go first and then on the next turn grabbed a double move to put the enemy in harm's way (see picture in last post). Luckily the combat dice were less biased  and the first attack was shrugged off with losses on both sides.  It was evident though that the revised play sequence needed some better wording on when a unit can hit a flank and how/when they can react. I ended up using the "does this look right" rule alot.

After repulsing the initial Turanian attack, the Earl plunged across the river on the left and center which led to a lengthy melee with losses on both sides, including first the Turanian commander, Sala Mandar, and then the Earl. For reasons which escape me, rather than supporting the Turanian spears holding the ford, the elephants decided to advance across the river and try to distract the archers threatening the spear unit that had climbed the hill rather than be shot at anymore. In the center a unit of archers was steadfastly holding the bank. 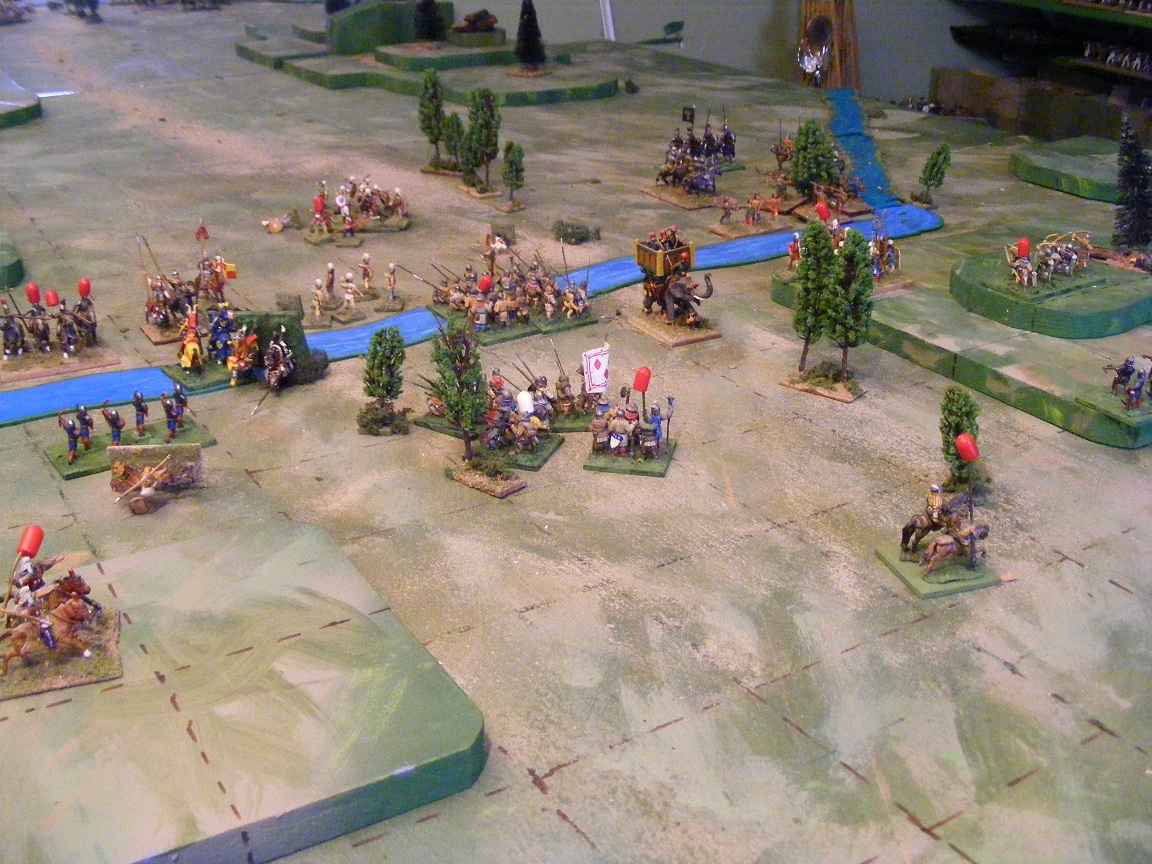 With both armies leaderless, things began to bog down but the Black Company finally managed to cross the ford only to be confronted by Turanian garrison cataphracts (the figures are just too old, battered, plain and dowdy looking to be nobles.) backed by hillmen taking cover in a patch of woods on the flank. It looked like a trap so the Black Company lowered lances and charged.

In the center things sputtered to a halt with Midland spears being recoiled by the archers while the Turanian spears were driven back from the bank. The spears attacking the steep hill were routed by the archers who then turned their bows on the elephant. The cavalry melee in the middle of the river stalled. With flanks open all over the place, casualties heavy and no one in charge, it was hard to see how it would all end. 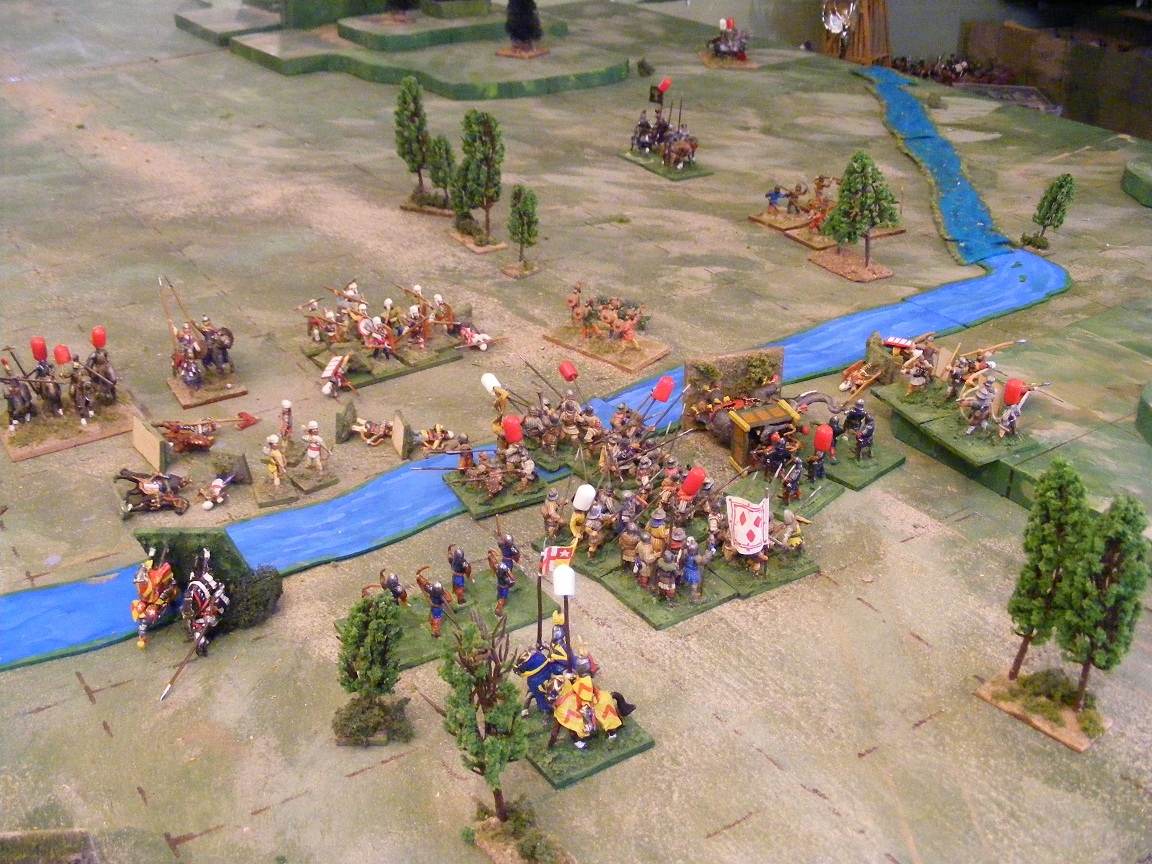 Casualties were heavy but the Midlish spearmen hung in there and the archers eventually took care of their counterparts and the elephants breaking the enemy's morale. Honours of the day go to the Black Company whose knights and cavalry turned the flank while the crossbowmen not only shot up the enemy infantry but in the end drew swords and closed in on the flank of the elephants (ok they probably shot them point blank).

So that was it, the last game of 2014, and it left me eager to play another. But first some more figures to paint and gaps in OB's to fill.