There is nothing like playing a game, even a solo game, to pique one's interest in a project. First came the preparations and 2 solo versions of Marathon, then when a snow storm cancelled the live play version, I decided to go ahead and improvise a Lydian-Persian clash to try out the new proposed OB's even though I haven't painted up any actual Phyrgian or Lydian troops yet.  The result was a fun game with that sort of not quite historical feel that I was looking for. The sort of feeling I get from re-reading the account of the Hyborian Age battle in Featherstone's Wargames or the battle accounts in Charles Grant's The Ancient Wargame or in various Tabletop Teaser reports (for example, read this account of an ambush of Princess Zenobi's caravan ( http://www.box.net/shared/5q0wqui8s4 ).  A report of the Bridge of Boats game will appear on the Battle of the Month blog before too long but it brought up some interesting points. 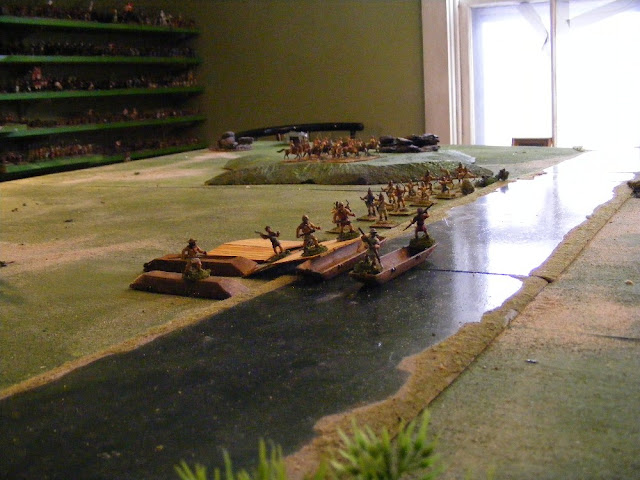 The calm before the storm.
Firstly, although  my original intent was to do just enough units to play a few Teasers, I'm now thinking that I want enough troops to be able to run a campaign with more troops on the shelf than will be needed in any one game. Not sure yet exactly how many more but since shelf space has not expanded, this means I will have to be tougher about evicting some unused or unpopular units or armies as well as finding a way to leniently include some favoured units that don't quite fit. Things like 3rd C Thracian mercenaries in helmets with rhomphai, some wild barbarian mercenaries from beyond the boundaries of the civilized world, perhaps from beyond the Black Sea, some with perhaps a slightly celtic air.

Secondly, I like some form of uncertainty in solo games and have been used to finding this in some combination of command control and variable moves. The morale and combat  results in WHAB seem to provide enough unpredicatility to satisfy myself and scupper carefully and not so carefully laid plans alike. \\\
They certainly provided several turn around points in the Bridge of Boats river crossing just played.

Thirdly, what to do about catapults? Now, really, in the 5th/6th C  I shouldn't need to think about any sort of engines of war unless carrying out a siege but when laying out the river crossing, I felt an awful urge to include them, like Alexander against the Skythians. Now if I was starting from scratch, I would probably be planning an Imperial Roman vs Sassinid campaign and Scorpions and Onagers would not be a problem. The same would apply if playing a Hyborian campaign, and of course I have a few engines kicking about,  hardly ever used in 30 years, some closer to appropriate than others. The jury is out, but if this is going to be my one ancients period then I may wave my magical wand and include them in certain scenarios, (like a river crossing).

Fourthly, the games this month have confirmed my feeling that points are not a good way to balance a game since some troops are always more worth their points than other, especially in certain situations and in a campaign, troops can't always pick their situation. So, while I may count points after the fact for interest  sake, I won't take them into account when designing the campaign armies. Units will be standard sized and troops armed as they are.Proportions of unit types included will be dependent on what seems reasonabl;e crossed with what is available and what I feel liek painting.

Next post, a first stab at orders of battle for the two sides.


Posted by Ross Mac rmacfa@gmail.com at 7:56 AM