I spent a considerable time and effort convincing myself that 18 figure units, or more accurately, units with 3 bases each of 6 infantry or 6 bases of 3 cavalry, were the way to go. Maybe one day I'll learn that when I have to work that hard to convince myself of something then its probably not right. While preparing to refight Marathon, I ended up having to play with unit configurations and found that surprise, surprise, the 24 man units that I had originally envisaged were flexible and looked good. 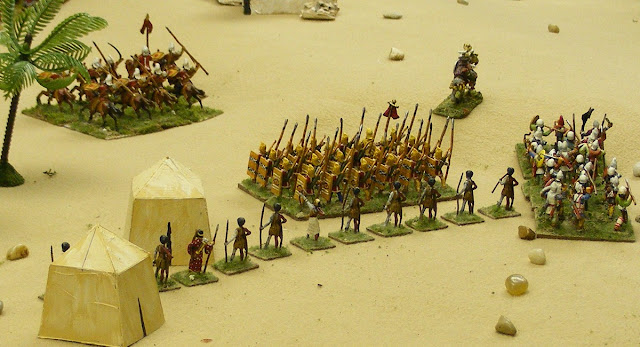 As originally envisaged: 24 man units with 12 man light infantry and cavalry units.
Now if I do revert to 24 man infantry units, what do I do with the cavalry? Keeping to the premise that all regiments are 1,000 strong I have 2 choices: field 24 man cavalry and skirmisher units or field the cavalry and light infantry as 1/2 units or wings, for example the Skythian horse archer unit would be 24 strong but might take the field as two 12 man wings or even four 6 man troops on the day of battle. Actually having the "quarter" as an administrative and tactical sub-unit appeals to me. I have no reason to believe the Persians used such an organization but then, as I've said before, this is "MY" army.
Of course, now I'll need to paint up more troops, but that's not a bad thing.
Posted by Ross Mac rmacfa@gmail.com at 6:50 PM