I didn't start this game with a well defined scenario in mind, just a rough idea, 2 partial armies that I wanted to get on the table and a set of rules to test. As I started pulling terrain out, the ideas slowly came together.
The defending Western forces were:
3 units of spearmen
1 unit of infantry
1 unit of archers
2 units of impetuous light infantry
1 unit of impetuous levy light infantry
2 units of skirmishes.
4 units of skirmishes and light infantry along with 4 dummies were hidden in various woods with neither side knowing which marker was which. The rest were in the palisaded village . Break Point 4.

The Midlish punitive expedition was composed of 2 units of cavalry one of which were Elite, heavily armoured knights, 2 units of archers, 1 of billmen (infantry) and 3 of spearmen.
Their rather ambitious mission was to capture the village by nightfall so that they could levy a contribution and be ready to head home before enemy reinforcements could arrive. Break point 3. 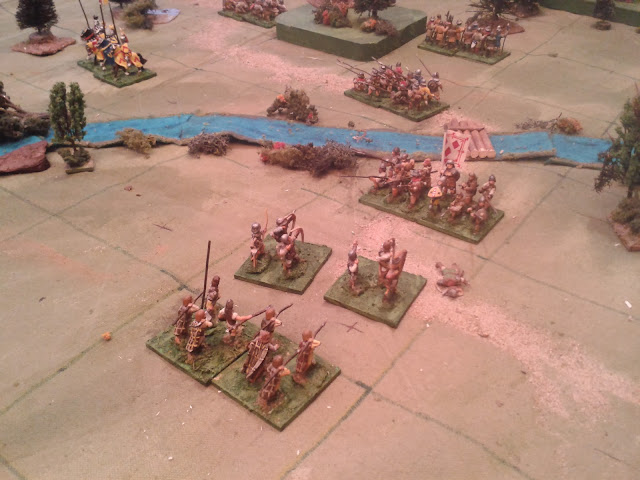 The Billmen, top,  far right are guarding the flank while the column presses on. A unit of light infantry has popped up behind the column and has just forced the archers to retreat.

The game started well enough with the Midlish column pushing ahead, archers in the lead, clearing dummy cards from several woods and being ambushed by skirmishers or light infantry from others. It didn't take long to halt the game for a rethink. Decisions still seemed too sudden and all the various charge bonuses and shooting nuances that were being tested weren't being matched by an equivalent control as to when things happened leading to counter charge and reaction rules and......this was where I broke for a think and tweak and came back, re-running the handful of shots and melees that had been done.The game felt better so I pushed on. 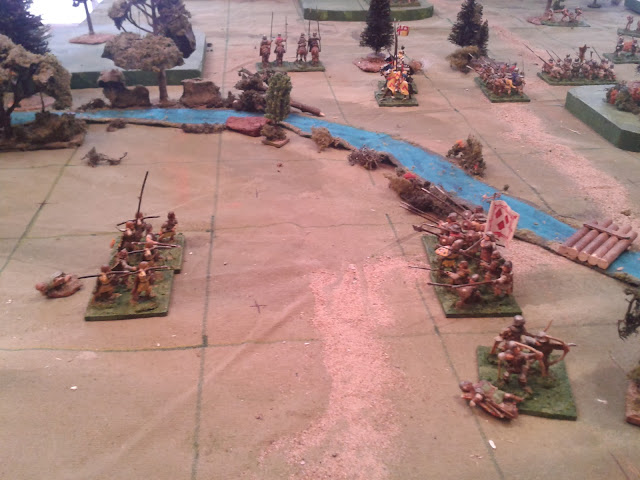 The redone melee did see the archers slightly more wounded but moments later a charge by the spearmen drove off the light infantry. (In the first go the light infantry had charged and wiped out the spearmen in one go due to a slightly over average roll.) In the distance, the Midlish army is struggling with poor command dice and an awkwardly placed wood. On top of the wood the West Folk are emerging and forming a battle line on top of the hill.

The game continued to flow well with the defending spearmen somewhat afraid to advance on to the plain and the attackers still struggling to get their force together while light troops harassed their infantry. At last the defenders got cheeky and charged some light troops in on the attacking infantry while moving the Islemen with their axes forward to stop the cavalry from interfering. It worked better than intended when the knights charged them and rolled one of the biggest handfuls of 1's and 2's I can remember seeing in a long time. The Islemen of course responded by rolling up. 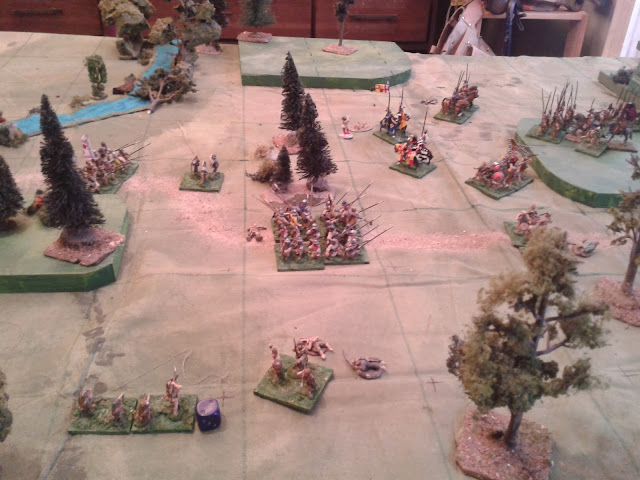 Victory hangs in the balance.
The loss markers were made up for Armati games in the late 90's.

Again the Midlish command rolls were low and most of their army was beyond command control was out of command making it hard to bring up reinforcements. They used the time to try and rally but shaken to the core apparently, the knights kept rolling 1 on their rally rolls despite being the General's body guard. Luckily for them the main body of infantry had driven off the light troops after a fierce and prolonged fight but the cavalry unit was suffering a slow trickle of losses to some very veteran skirmishers.

At this point both armies were 1 loss away from breaking. Possibly the BP should have been a little higher but the game did last longer than I expected with lots of to and fro so maybe not, anyway, it is an optional rule in the event of no other victory conditions. It this case it was to capture the town by nightfall, I had just forgotten to say when that was!

Time to do or die, the cavalry charged the skirmishers carrying on into the spearmen while the knights charged the Islemen again. This time both melee's went as expected. The heavy cavalry did some damage but were eventually driven back while the Islemen were blown apart by the shock of the knight's charge. They retreated with 1 strength point remaining but pursuit was blocked by a fresh unit spearmen. The defenders made a good command roll, pulling back quickly into the palisade and the Earl suddenly noticed that the sun was setting. Letting the infantry straggle up out of command and taking time to rally too many troops too often had used up the day.

It was time to go home before the woods got any darker. 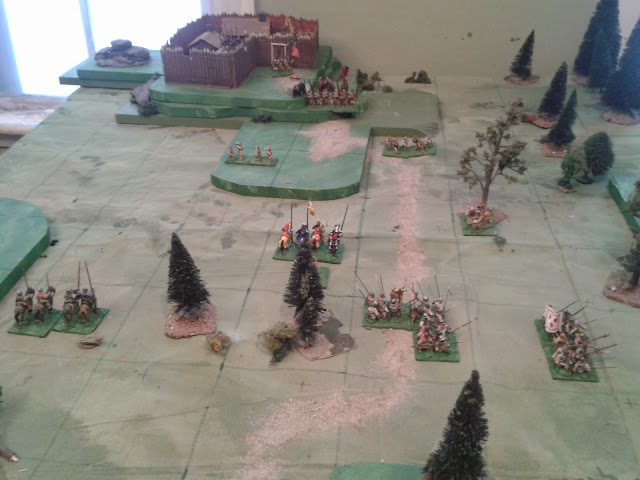 The end of the day. Neither army quite defeated but the village not even attacked let alone taken and burnt.

Happy New Year to all !

Look to see more Gathering of Hosts Medieval/Fantasy battles in the year ahead as well as more discussion on the thoughts behind the rules as they get  tried under fire and as I polish and add the fantasy supplement.