The 1st batch of reinforcements have arrived. 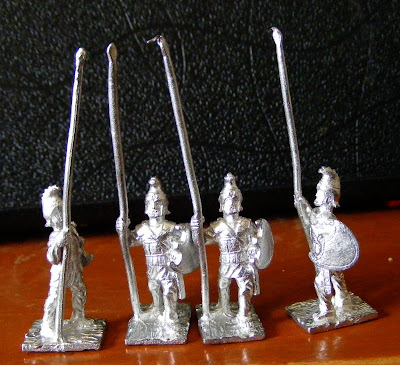 Garrison Phrygian Spearmen in Reserve
I now have enough Phrygians for 2 x 24 man units. I really like the 25mm spearmen pictured above. I ordered a couple of axemen to throw  in as officers as I'm not sold on the idea of a unit of armoured infantry with 2 handed axes as their primary armament. The wiley Rob threw in a sample Immortal in Persian robes in reserve, they are much better than is suggested by the pictures I have seen, and match exactly what I was looking for so now I will have to have at least 1 unit of them. The 20mm figure is classic early Garrison and I wanted at least 1 such unit in my army but I'll reserve  judgement until I paint them. The presence of armoured infantry throwing javeleins will have me revisiting my army lists though!
Army lists are problematic beasts. In theory there is no reason that I can't sit down and just write a Lydian army list up, but I'm a bit lazy and I am wary of accidently designing a killer army if taking  it into battle against maruding bands of Assyrians and Egyptians which I hope to do. I had been planning on using the Greek list but had 2 issues and now have 3. The list requires a high percentage of hoplites, I was planning on getting around this by fielding the minimum and counting any armoured Phyrgians as lightly armoured hoplites. This probably over estimates their abilities and downplays the importance of Greek and Carian allies and mercenaries. Now, looking at the figures, there is no way I can called the shield "large" and 1/2 of them are throwing javelins. The other option was to call them peltast equivalent but the list will have to be modified to allow armour and I am back to having too many Greeks. The other issue is that while the Thessalian option allows me to field enough decent cavalry to make me happy, they are slow. I had convinced myself that the Lydian lancers would be heavily armoured with high impact and thus fearsome to the lighter, faster Persians but it's iffy. I also like standards and the Greeks don't get 'em!
So, its modify the Greek list or have another look at the Persian list. Here my hoplites all come as mercenaries and I get as many good heavy lancers as I want as well as armoured infantry with spears and small shields. Rubbish in battle of course, but if you have enough they can defend a hill or obstacle well enough. The interesting bit is the need for unreliable levies and allies. The Lydian empire  crumbled pretty quick when pushed and one wonders how dedicated some of the recently conquered subjects were.
A revised army roster is called for I think, then I can decide.
Posted by Ross Mac rmacfa@gmail.com at 11:15 AM