Its been 5 years since I decided to develop a fast and easy set of homegrown rules for my ancient/medieval games rather than trying to keep up with the latest commercial fad. This current exploration of a Morschauser based set is nothing like what I had in mind back then. This has led me to question whether or not I should keep the Gathering of Hosts name so I decided to go back and check the rules against the original criteria. (See camel meets straw post)

So far the new rules clearly meet 4 of the criteria. They are simple and intuitive enough to be played without a QRS and to be easily learned, focused on major troop types rather than details and the 6 cm bases are compatible with more than one set of commercial rules, esp since I will end up with many pairs of stands. The original list calls for single figures but allowing for elements and tracking hits which is how the new rules work.  The intention is to develop some sort of command control for commanders so that remains a maybe. Lastly while large battles work I have not yet tried a small game so that is also an open question. With somewhere between 5 and 7 of the 7 criteria met, I am satisfied that I am justified in continuing to use the name.

That settled, here is a summary of the rules as played by Rob, Norman and myself last Friday. 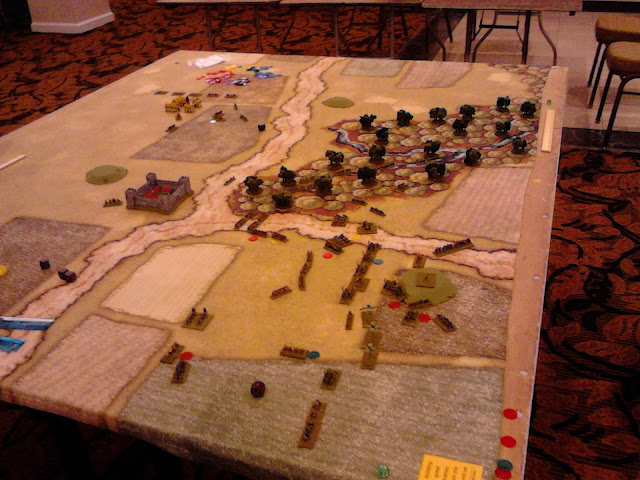 After a brief discussion on magic we decided to defer and just made the scenario be about disrupting a wizard who was casting a complex spell to demolish the Elven castle. (he can be seen atop a small green knoll in the nearest corner of the table in the picture.

I spared a few troops to delay the enemy's approach on the wood and deployed the rest in 2 lines between wood and table edge with a reserve of warg riders and flyers including the mighty if somewhat cartoonish dragon. The enemy massed cavalry and spearmen against the gap with a host of elves going through the wood. The attackers had 37 stands and the defender 35 iir.

I took an early lead as my archers shot well at the attackers. Since Rob's cavalry started opposite my main line while Norman's infantry had to slog through the woods and over the river in a giant wheel, his cavalry struck first and, after a fierce fight, were pretty much wiped out before his infantry could close in support. I did a sort of Roman line relief and battled with his heavy infantry, getting the worst of it before my reserve attacked his flanks and rear (I like flyers!).

My horse archers sat and watched Norman's advance for a while but finally took off for a ride around the enemy, hoping to hit Rob's heavies in the rear. Norman's archers did some nimble blocking and though I got around them it took too long so I turned on them. It took about 4 turns but eventually I wiped him out at a cost of over 1/2 my force.

Back in the woods Norman's eleves finally threw the few remaining remnants of my flank guard out of the wood. They were just in time to see the sort of damage a playful dragon can do. During my melee phase the enemy lost their 19th unit and were no longer able to shoot or attack. My forces had lost only 15 units so the wizard was still mumbling and waving. The castle soon exploded in  colourful clouds of blue and green and there were loud cries of delight and chortling, barking and fighting from the chaotic crowd in front of the castle.

On the whole the rules worked well though we needed better names for unit types as well as some magic and monsters. Tge question of characters and command control are still up in the air. The command and control is especially problematic since the game ran well without any including the occasional blunder, units not moving, or the wrong ones,  open flanks etc. With 3 players and roughly 3 dozen units aside, the game ran about 2 hours. Clearly room for more rules & complications or more figures though a more complex scenario might help. A three hour game would be fine.

My next step will be to move more figures to 60cm square bases and play a small skirmish.