I may like playing fictional battles and teasers but for testing rules I like to run them by at least an occasional historical scenario as a benchmark. Since I had played a successful game using the ancients variant of the Square Brigadier and was considering just translating them into an improved Gathering of Hosts, it seemed like the right time for an historical game.  In this case it was the Grant version of Platea from the Ancient Wargame. This had three advantages for me. The first is that the groundwork was done, the second was that I was familiar with the original battle including two different English translations of Herotodus' account, and lastly I had already played it using the original Gathering of Hosts so had a game version to compare it to.  (and of course Megablitz Tim had recently brought it to mind.) 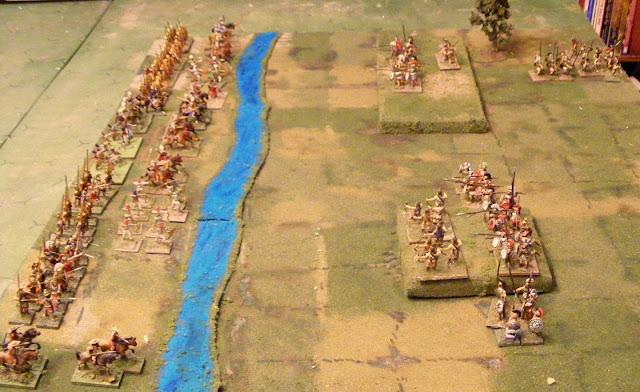 The 1/2 scale gridded version of Platea, laid out, ready to go.That's 1/2 vs my original game, closer to 1/4 scale compared to Grant.

There are a few issues with Grant's scenario with regards to troop choices and deployment and one day I may do my own version, if I don't sell off my Greeks and Persians first, but it works well enough for my purposes. The questions were mainly would the rules allow the Greek and Persian armies to show their varying strengths and weaknesses and thus push them into historical tactics and  would it be enjoyable as a game. Since I was playing on a 30"x36" board, with each square holding 1 60mm wide base, I had to translate Grant's 6'x9' table and 20 to 48 man units into something smaller. To fill the board I used 2 units for each of his except for the extra-small helot units which I replaced with a single unit each.   Since Grant's book doesn't seem to be easily available I'll give a brief summary of the units as I fielded them. Persians: 4 Elite archers, 2 Spearmen, 6 Light Infantry skirmishers, 4 Horse archers, 2 Elite cavalry. Thebans: 2  Phalanx, 2 Light Cavalry.  Greeks: 4 Elite Phalanx, 6 phalanx, 2 skirmisher, 2 Poor skirmishers. 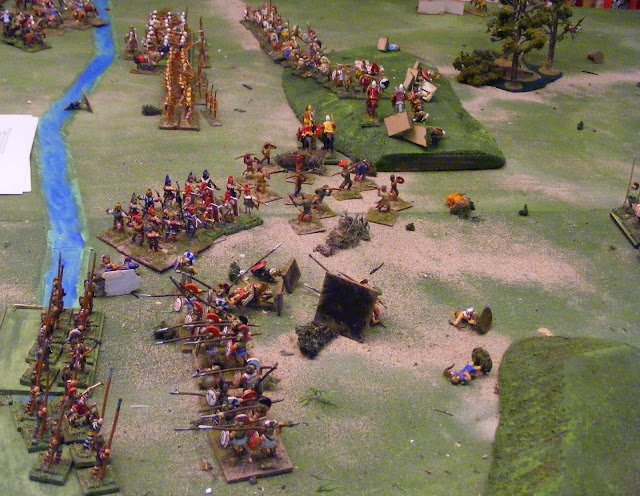 An archive shot of my original Platea refight on a 6x8 table with 12-24 man units in place of 20-48 man ones.
The first run through worked OK but there were some niggly issues with the special period rules and the board seemed very full. I also had to leave the Corinthians off board and promptly forget them! So I turned the board sideways and used 1 stand per Grant unit. I thought it might be too small but this actually gave me a better game which in turn meant food for thought. 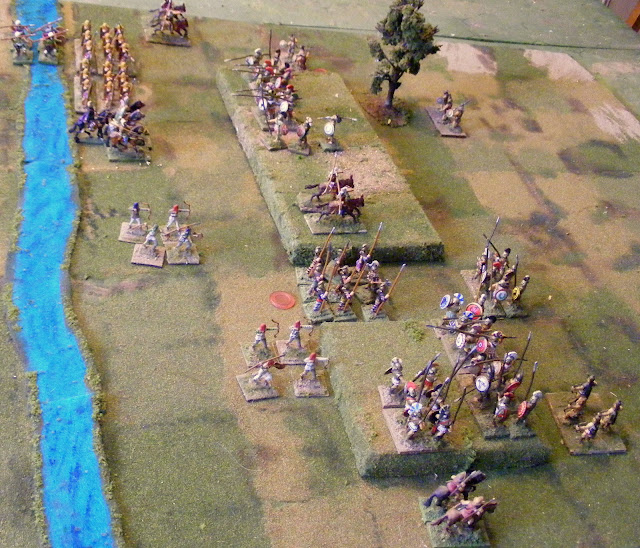 Extra-petite Platea. The Athenians are under heavy pressure. The Persian and Phyrgian infantry are
3 deep which is how I intend to base future units of spearmen. .

Its good to know that a small game works since its easier to transport two dozen stands than four dozen but I don't always need to transport the troops. I tweaked the special rules, reduced ranges and tried the full mini-game again. This time it worked as good as the mini-game. I was still concerned that it was too easy for a player to peel off part of the phalanx and us it independently but on further thought, every time the Greeks actually did this, the offending unit got surrounded and cut up so it may be possible but a bad idea which might actually have been the historical case..

The Thebans defeat the Athenian left after a tough fight.

The Persian plan was pretty simple, push light troops and cavalry  through the gaps and around the flanks, let the Thebans do the Hoplite thing, and let the Persians pepper the Spartans with arrows. The Greeks withstood the arrow storm and dealt with the flanking forces but were pretty much pinned doing this and bringing up reinforcements. As long as they survived though, strategically they were OK  , at least up to the point where the Thebans broke the Athenian left. In this they were ably assisted by their cavalry which had finally dealt with the archers and ridden around the Greek flank. Persian cavalry had also moved around the opposite flank and Pausanius led his bodyguard in a fierce rush which chased them off. Unfortunately he was hit by an arrow and went down at a time when the army couldn't afford to be frozen. 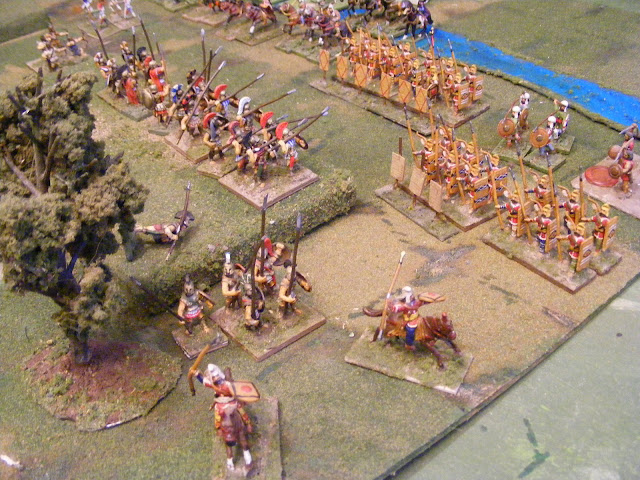 The shield barrier is up and the real arrow storm is about to begin. That's the Greek general lying face down on the hill.

Unfortunately for the Greek Alliance, the remaining Athenians were too stubborn to fall back on the Corinthians and kept trying to regain the upper hand by themselves while also facing down the advancing Phrygians. 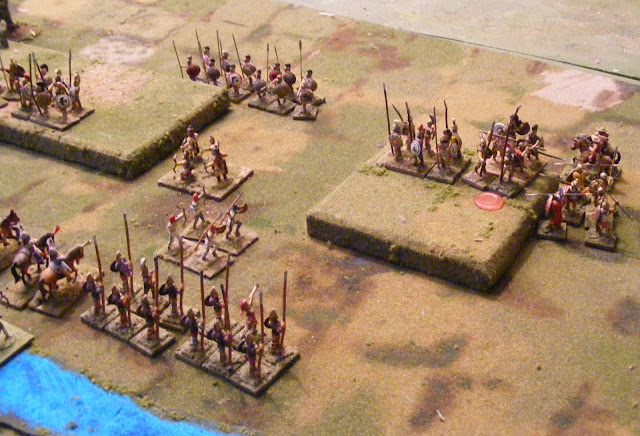 The Athenians could really have used a rally order at this point but Pausanius had just fallen and their turn was next.

With the Athenians swept away and the arrow storm occasionally disordering even the Spartan phalanx, the omens turned favourable and the Spartans charged down into the Persian line. It was a tough fight but soon unit after unit of Persians broke. It was too little too late though, the entire Greek army had been dispersed and the Spartans were being surrounded by light infantry and cavalry while still facing the remaining Immortals. The Spartans could probably have retreated off the field and the invasion might have been halted for the moment but Mardonius would not have been contemplating retreat from Greece just yet. 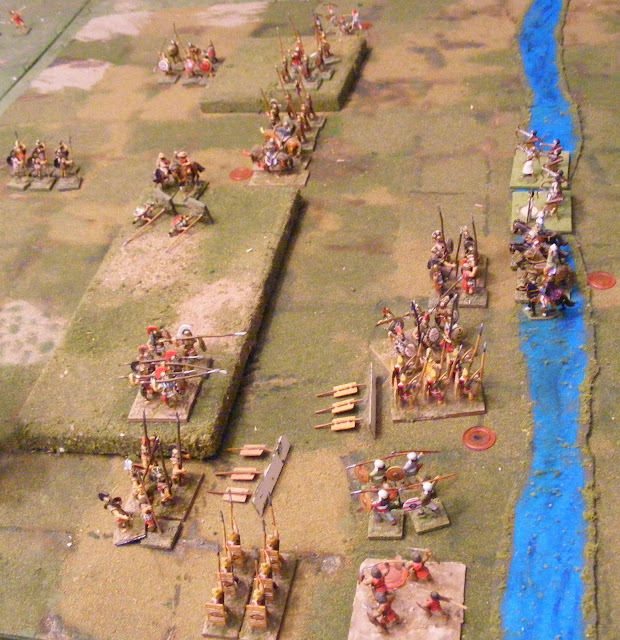 The rules as played are available from my Battlegame of the Month blog. (I used the Five Kingdoms list with Spartans, Immortals and Heavy cavalry being Elite and only the Spartan skirmishers being poor. )
At this time I am not planning to have a grid on my main table once it is repainted so the Gathering of Hosts rules will remain conventional but I will be translating the combat and morale mechanisms from this to it and once done it will be  available on both blogs.