Chronicle: The Battle for the Tower

CHRONICLES of the FIVE KINGDOMS

Late in the day, the battle hangs in the balance.

It came like a whisper on the wind and suddenly everyone in the market knew that there was a treasure in the old Tower on the Mound in the middle of the steppe. Not just any treasure mind but though none could say exactly what it was,  it was something no one who wished to be Master of the Five Kingdoms could do without. So it came to be that the men of Alexandria the Forgotten and the soldiers of Turan each found themselves trudging across the dusty Steppes, warily watching a growing dust cloud on the horizon. . 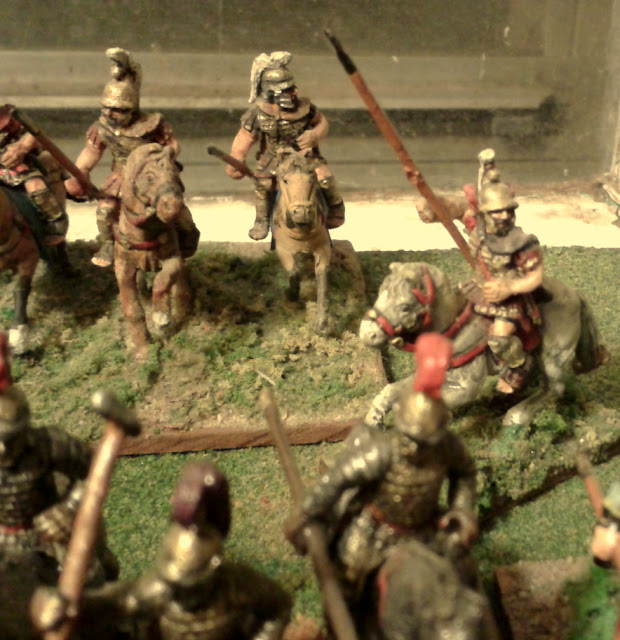 King Antiros of Alexandria the Forgotten has come in person at the head of a select force. 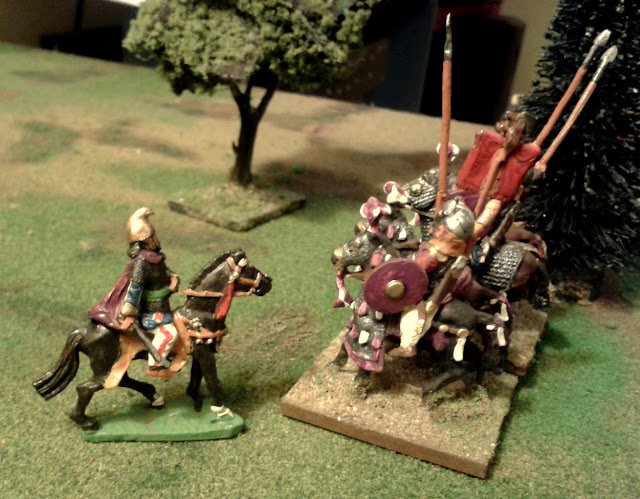 It was late in the day when the armies arrived at the tower. There was no question of a truce.

King Antiros deployed first, the lumbering phalanx deployed deep on the right with peltasts to guard their flanks. Those on the right spread  out as a skirmish line while opposite the tower they loosened their swords and prepared to storm the tower. To the left of the tower rode Cataphracts and Lancers with horse archers on the far flank. The King kept one squadron of lancers as a reserve.

General Saromander deployed his infantry in the center supported by a troop of elephants. The nimble slingers were sent ahead to take possession of the ruins on the hill. Horse Archers, heavy and Light guarded the left, the Royal Guard and more cavalry guarded the right. 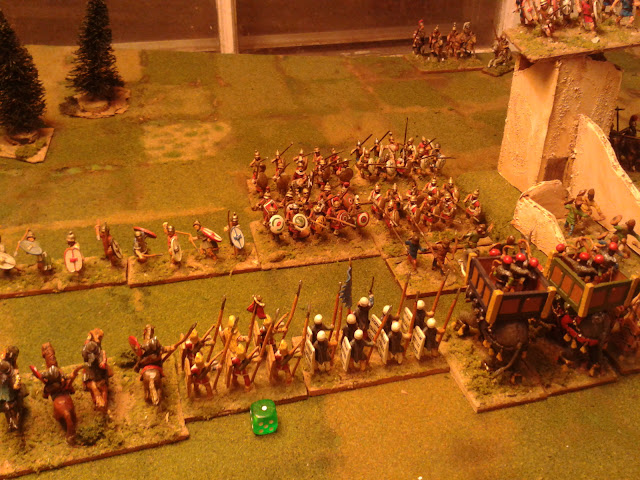 The first clash came in the center as the peltasts stormed the Tower and strove to drive the lightly armed slingers from their positions in the ruins. It was a David and Goliath struggle  (ed: that is a slight exaggeration to say the least) but it raged through half the day. Outside the walls the phalanz swept forward sweeping away the Hillmen skirmishing in front of the Turanian line. Then suddenly there was a loud trumpeting and forward came the Turanian elephant corps. Bracing themselves, the pikemen awaited the shock. 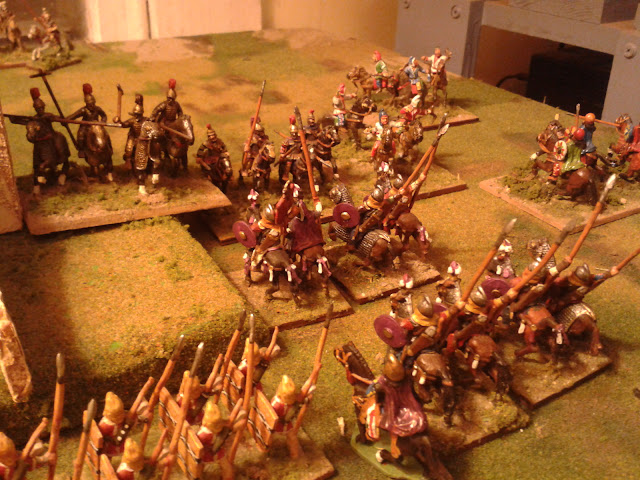 Across the field, the King sent his cavalry forward. The Royal Guard, in a deep column, unleashed a volley of arrows then taking up their lances rode forward while the lighter Turanian cavalry sought to keep the enemy horse archers at bay. The shock of the charge was tremendous but neither side gave way. As the horsemen circled and hacked at each other, the King's lancers proved no match for the heavily armoured Turanian Guards and soon the remnants were fleeing back across the plain. . 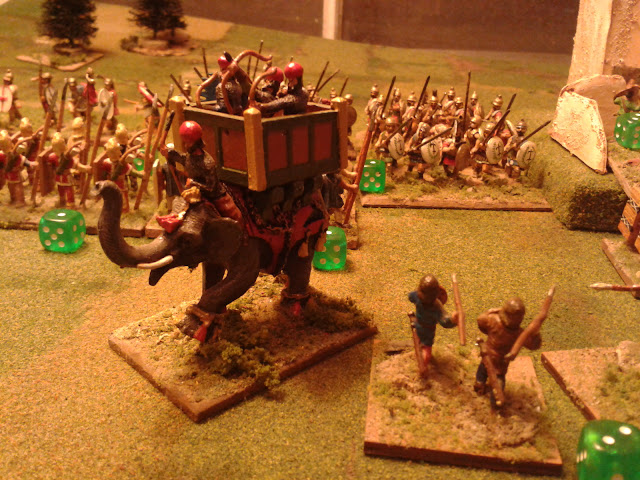 All along the line, the fighting spread, inthe ruins and across the field with first one side then the other gaining an advantage. The peltasts were unable to roust the slingers from the ruins and were slowly cut down but in the center, a lucky pike thrust struck a young elephant in the eye. Rearing back in pain, blinded with blood, it panicked and the confusion spread, suddenly the whole herd thundered off across the plain.

Undismayed, the Turanian infantry pushed forward into gaps in the phalanx and the Turanian moved forward to ride around the flank. Despite the loss of the elephants the battle was swinging towards the Turanians.

This was not the King's first battle though and he was not ready to give up the prize so close at hand. He pulled back his infantry and cataphracts, reformed the phalanx,  brought up his reserve of lancers and prepared for one last throw of the dice. 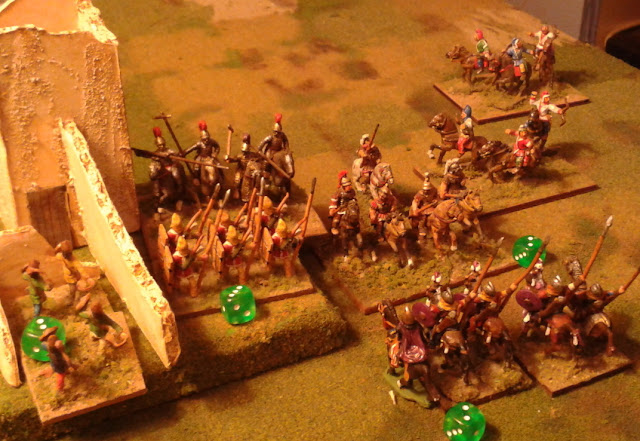 The King leads the final attack.

With Antiros at their head, the Alexandrian cavalry slammed into the Turanians sweeping away the first squadron of the Kings Guard and pursuing into the second while an arrow storm drove the lighter Turanian cavalry back in disorder. A company of spearmen on the hill, however, held despite terrible losses.

With Sarumander at their head, the heavily armoured Turanian Royal Guard seemed more than a  match for their lightly armoured foe in melee while the Turanian infantry began to slip into the ranks of the Cataphracts, hamstringing horses and toppling the heavy riders, knocking them all to sixes. The Cataphracts, seemingly helpless, turned and fled or were cut down. The battle seemed lost but out of nowhere, the King's horse archers, tribal auxiliaries but veteran fighters, smashed into the flank of the Royal Guard which collapsed leaving Sarumander a prisoner. The Turanian army seemed paralyzed, unable to respond as the King led his cavalry forward into the Turanian infantry and suddenly the whole Turanian army was fleeing. 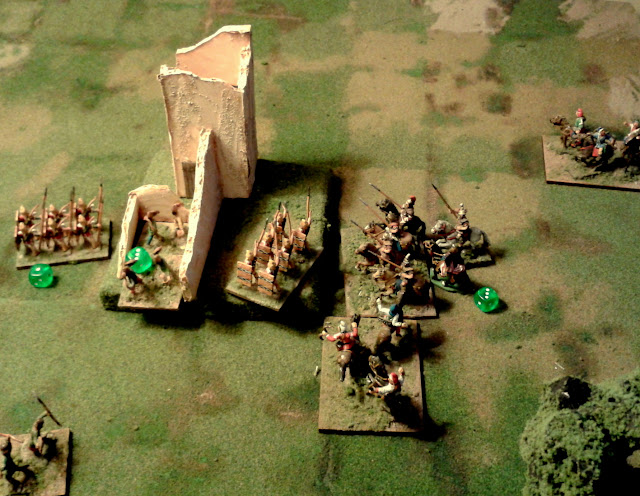 As the sun set, Antiros and a few picked companions dismounted and entered the tower. An hour later the grim faced party re-emerged. What they found there was a secret they did not share.