Last Hosting of the Year

The honour of Last Game this year goes to my 25mm Ancients. The close of one era and the opening, or reopening of another, but more on that another day. As the Winter campaign begins, Queen Sharazhad of Marakanda herself has led the vanguard of her army out to meet the hosts of King Rossius the Unknown of Turan. 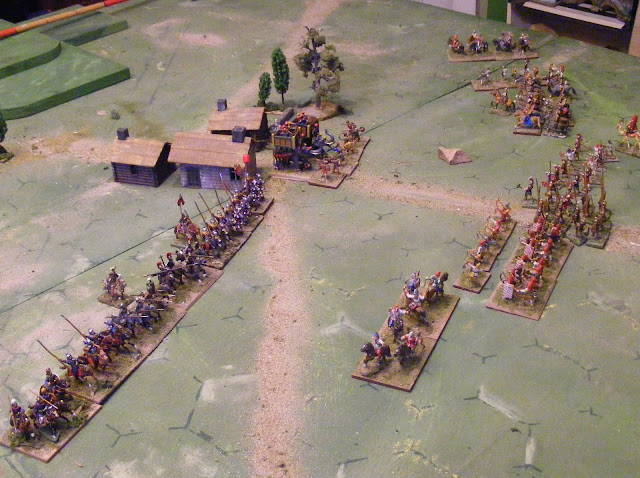 The Turanian forces were comprised of a unit of cataphracts, two of lance and bow heavy cavalry and two of light cavalry, one of them being horse archers. There was also an elephant unit with its attached light infantry and 2 wing commanders. The Maracandians had the Royal Horse Guards, a unit of lancers and a unit of horse archers backed by two units of light archers, one of massed archers, one of spearmen and one of Hillmen. There was also a pair of war engines dragged along for reasons unknown and two commanders. The rules were the universal edition of Hearts of Tin which is essentially an amalgamation of Gathering of Hosts with Hearts of Tin. The debate over a new name such as Hosts of Tin is still sputtering.

The Turanians arrived early and had the mobility to deploy and seize the crossroad before the Queen's forces were all on the field of battle.   Rossius seemed in no great hurry to press the attack but was rather determined to draw the enemy in before striking. 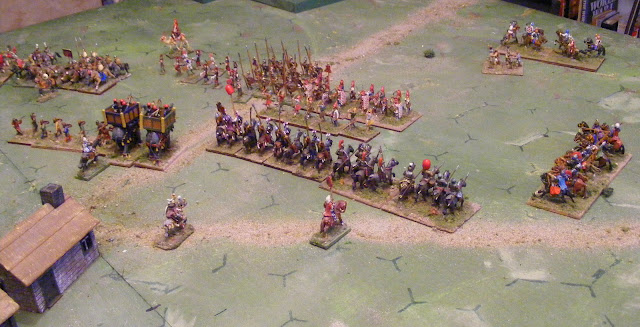 The Queen's heart beat faster in this her 2nd battle but her veteran soldiers and commanders were not dismayed. She steeled her will and as the Turanian lancers spurred forward, she signalled for her own cavalry to attack. 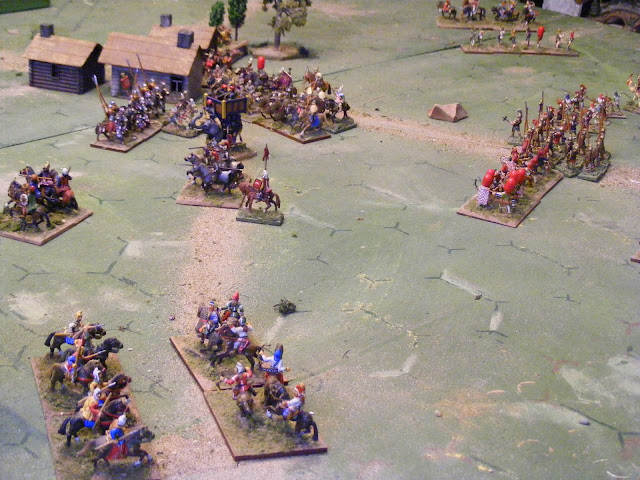 As the Turanian cavalry charged, the sky was darkened by Maracandan arrows and despite their armour the Turanian Clibinari broke to the rear. The Cataphracts charged home but the Turanian archers wielded their axes to good effect and soon the Cataphracts were also galloping backwards just as the Marakanda cavalry swept through the enemy light infantry, pushing their panicked horses into the flank of the elephant line. On the other flank the Maracandan horse archers swarmed the flank of the advancing Turanians and in a flash Rossius whole army was galloping towards the safety of the hills.

Sharazad could not help but feel that she and her troops had been blessed with great good luck when it was needed most and that one victory  was not the end of a campaign but only a beginning.
Posted by Ross Mac rmacfa@gmail.com at 9:26 AM