We have found the enemy and they are...

A bit of a dog's breakfast frankly.

In this 2006 shot mostly Ral Partha & RAFM with a few Garrison, & Rospak figure. The petasos hatted cavalry in the back are RAFM. (Pays to know which heads and bodies are available from them)

Its worse than this picture would suggest, 1/2 have been rebased, several heads have rolled off multi-part bodies ( I have since learned that a few seconds with a dremel to deepen the socket and a dab or greenstuff to get the neck just right, works wonders. The various mis-matched spear thickness, lengths and styles looks ratty and many are missing altogether. For the rivet counting sorts, the mix of 6th C bell cuirasses on the Benassi figures with classic 4th/5thC linothorakes and spolas and 4th/3rd C muscles cuirasses not to mention completely unarmoured hoplites, must be distracting at least. I figure the enemy only sees the shields anyway, well except for those hoplites who insist on exposing themselves. In any event, even if I salvage them all, broken ones included, there are still only about 120 of them. There are about the same number of peltasts, 1/2 early Thracians the rest mostly Hellenistic Thracians and Thureophorai, scads of psiloi, and slightly too many Greek and Thracian cavalry for any self respecting Greek army. I would certainly need to at least double the number of hoplites for a reasonable Persian Wars Greek army, but how often can you refight Platea? ok and the others, from a point of view of playing Table Top teasers, without peltasts, the army is problematical. I did consider doing the Anabasis of the Hundred (literally) but that calls for several "native" armies which each appear for 1 or 2 encounters. So what else? 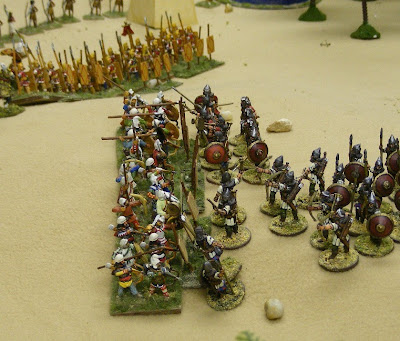 The brave Medes and Persians stand up to the Assyrian Bully, and send him homewards, "to think again". An out-take from a play-through of a Battlegames Tabletop Teaser. You'll have to buy a copy from Henry to learn more about the game but the Persians are a mix of RAFM and Garrison. Here's another shot, Garrison Mede cavalry riding down some Assyrian archers, almost. 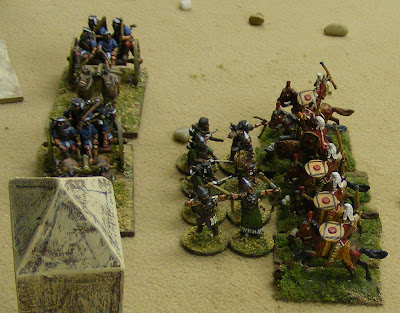 So, since the Medes helped burn Nineveh and then passed off to the Persians to take down Babylonia, Assyrians, Babylonians or Egyptians might be interesting but aside from the Assyrians and Egyptians being 'bespoke', none of these armies translate outside of the period at all. Who else? 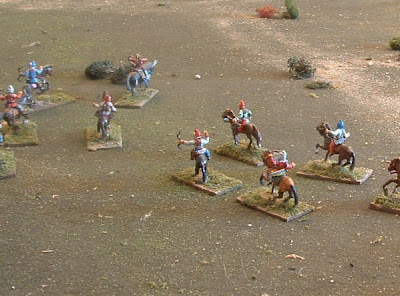 RAFM, Ral Partha & Minifg horse archers skirmishing.
Saka come to mind, a major enemy for the Persians as Cyrus found out, they seem to have had substantial infantry forces able to go toe to toe with the Persians, they translate easilt into Parthians or Alans to face later armies and if I withdraw the Scythians from my Persian army, I have a start. They even hired Greeks and Thracians, in small quantities, at leaast once. BUT, here are two open plain armies relying on cavalry and missile fire and that still leaves me needing to buy most of the new army and having to dispose of a lot of figures. Well lets look at the figures again: mostly Greeks and Thracians with a few Anatolian levies. What about favorite old uniform books for inspiration, always liked the Phrygians in both Saxetorph adn Funcken. Ahhhhh, looky here, a 5 year war between Cyaxeres, King of the Medes and organizer of the Mede Army (aha) and Alyattes, King of Lydia. A war in which they each took turns "discomfiting" the other. Not the last war as it was nearly 40 years later when King Croessus was misled by the Oracle of Delphi and was conqured by Cyrus the Great. So what do we know about the Lydians? Not much apparently, a few pictures or scultures from a century or so later, a few snippets from Herodotus, Xenephon and Nabonitis (and who can tell which of these was the least accurate?) and some speculation and extrapolation. Enough? Yeah I think so. Vaguely Greek looking shock cavalry, Greek & Carian mercenary or allied hoplites and various light infantry based on pictures and descriptions of the same troops in later Persian service. Next post: Alternate versions of these armies for later opponants and hopefully some brand new pictures.

Posted by Ross Mac rmacfa@gmail.com at 3:27 AM