To ride, to shoot and to tell the truth

The 3 essential qualities of a Persian nobleman. 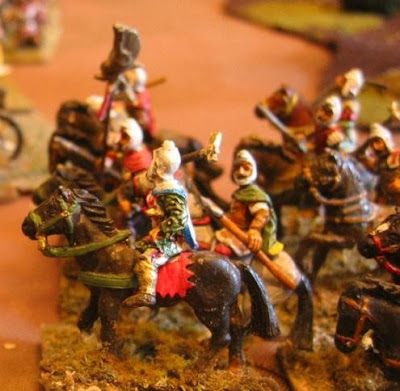 Cavalry was an important arm of the Mede and Persian armies even if not the most numerous part. I've decided on 5 regiments, now to select which ones and how to arm and equip them. There are 3 main considerations, historical plausibility, how I intend to employ them on the table and what figures I have or want to have.

Evidence on arms and armour is ambiguous but based largely on Herodotus and some vase paintings, early Mede cavalry seems to have been lightly armoured and relied on harassing the enemy with arrows and javelins but also seem to have been prepared to fight hand to hand when called upon. Herodotus describes them at Platea as coming forward by squadron to shower the Greeks with missiles before wheeling away, not surprising since Cyaxeres became King by leading the Medes to freedom after 25 years of subjugation to the Skythians.

The cavalry of Rosius would also have contained Saka or Scythian horsemen, whether allies, mercenaries or subjects and it is possible, though unlikely, that some of these might already have been armoured nobles on horses protected by partial fabric or metal bards. I would also expect some Cappadocian cavalry, probably lightly equipped with javelin.

4thC Persian Cavalry, RAFM conversions. I have about 30 of these, some with armour showing, some without.
On the table, the cavalry can be used to envelop the enemy's flanks or to pin and harass his spearmen. The bow armed ones are best for direct attacks as they can do so from a safe range. Since I'm deploying my troops in 1,000 man regiments not 100 man squadrons, I'll have to imagine the squadrons taking turns to ride forward to shoot at point blank range before wheeling back to the main body. They will also have to contain the enemy cavalry. Against an army like the Lydians, with a reputation for hard charging shock cavalry, this may be a challange (queue the camel corps!). The large units also have to be taken into consideration, they require a lot of room to maneuvre ao are not easily interspersed with infantry or used as a mobile reserve. It appears to be best to use them as a seperate force, oddly enough this seems to be how the Persians operated.

A unit or two of lighter skirmish cavalry, Sythians or Cappadocians would be useful on the extreme flank since they should have the agility to get around behind the enemy. It is tempting to add a unit of Guard cavalry or Saka nobles for the potential shock value but this might be a false temptation away from the army's strengths.

Comparing the 90 or so Persian and Skythian cavalry in 10 units that I have now vs how I want the army to look and act, I will be able to field the following in short order: 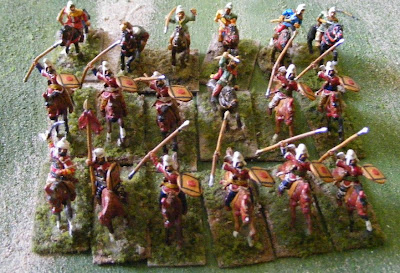 An 18 man unit doesn't look so big on 20mmx40mm bases and formed deep!

The "Armenians". Full points to anyone who can identify the origin of the officer in the middle.