A Magic Cauldron is no match for a Good Blade

Today I took a short break to blood my 1/72nd Dragon Rampant armies. 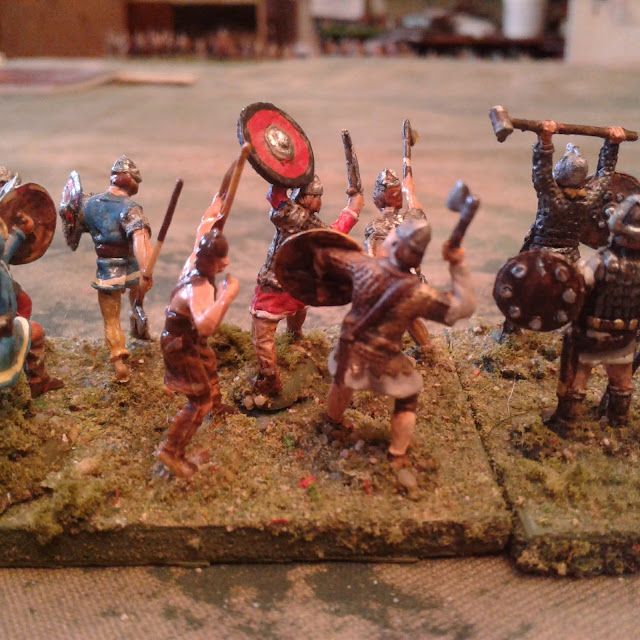 Given that I'm  still pretty green at this, I just did an equal points encounter on random ground. A toss of the die indicated that the Lord of the Black Cauldron was the Attacker. He himself was rated as an Elite Foot Minor Magic user with the Dragon's Breath, Heal Thyself (aka "back in the cauldron buddy") and Befuddle them spells. His army consisted of a unit of Scouts, a unit of Heavy Horse, a unit of Bellicose foot (led by a Chieftain in a chariot)  and a unit of undead Cauldron warriors, Bellicose foot (which I just realized were supposed to be Elite foot, slow and reluctant to die. Damn!). Their plan was to send the cavalry forward up the right with an attack en echelon while the magician used dragon's breath to protect his army from catapult fire until they got into range.

The enemy under the Sea King, himself Heavy foot, were the men of the sea with a unit of scouts, a unit of Giants (Elite Foot), 2 units of light spearmen with short range missiles and a catapult (Heavy Missiles). Their plan was to make as tight a shieldwall as possible while pounding the enemy with BIG rocks.

After a shaky start the armies started to get together. The magician's first attempt at Dragon's breath was a small puff of mist which didn't stop the catapult from nailing a few zombies. The second attempt was better but the Zombies were already dashing ahead full speed regardless.

So there we are. I think I am starting to get a handle on these silly rules and can see how some one well versed in the system could develop various valid game tactics (as opposed to ones inspired  by either fiction or history).


Luckily, after next Saturday's game, which I hope is exciting and fun for all who take part, it won't be any of my business!