The Hosts consider the Articles of War

I suppose it is Landsknechts in particular that we think of as agreeing to the offered Articles of War before signing on but I like to think that my toy armies and I go through a similar process. To avoid spinning too many tires I have spent a fair amount of time over the last 3 days re-reading old rules related blog posts, game reports and post game discussion, old rules drafts and so on.

Despite various superficial and important things like organization, basing and the grid/no grid debate the real key essence is the choice between figure dependent, element dependent or unit dependent rules.


Figure Dependent. This is Old School nose counting. A unit is composed of X number of figures. The number of figures affects the unit's combat strength and figures are removed (or marked) to record its deterioration as a result of combat. Usually this is coupled with separate morale tests as strength and morale are considered related but separate things. The main advantage is that it is simple and intuitive but it is also quite flexible. It also encourages large numbers of figures which may be good or bad depending on circumstances and preferences. The main disadvantage is that it is administratively heavy. If bases are used rosters or markers must also be used and tracked rigorously. If singles are used they must not only be deployed and moved about but the casualties must be gathered up and sorted and re-united with their units afterwards. If, as usually the case, the units are large, it is hard to adapt to hexes. Smallish units on large hexes pose no difficulty however.

Element Dependent.  This is what I think of as the Middle School approach, basically a stream lined development of the OSW approach. Now units are composed of standardized elements or bases of troops. Strength is measured in elements rather than figures and losses are taken in terms of elements. If a roster is used then this slides backward to being just a variation of figure dependent. Fire & Fury is the classic example of this approach but it has been used in ancients as well. This approach shares many of the benefits of the OSW figure approach but without the admin burden. If used with hexes, it is often hard to get enough elements to fit in a hex and its starts to edge towards being a less sophisticated version of a unit based game.

Unit Dependent. This is the Morchauser/DBA/Armati/Impetus approach. The unit is treated as a whole. Usually it is on 1 base but Armati, for example, uses 2 bases for compatibility and to allow some units to be formed wide or deep when being deployed. Losses are taken in whole units, generally with no degradation along the way. There way be a roster  but it is against a theoretical morale/combat value and not a mere matter of how many figures are present. The advantages are largely in simplicity of administration and play but also in allowing scales to be played with, allowing large battles to be recreated with fewer troops. The most administratively simple method is the DBA live/die approach which does not track slow attrition. Mostly this works with a loss of flavour and intuitiveness rather than accuracy. The alternate roster approach seems to resolve that which may be one of the reasons why Armati and Impetus have been popular. As long as the stand size fits the grid, this is the easiest system to adapt to a grid.


Looking back, Gathering of Hosts began as figure based and migrated to element based and was exploring unit based when it collided with the square brigadier and everything froze in time. I'm not going back to figure based.  I was however leaning towards element based until I started looking at practicalities crossed with battle reports. Unexpectedly, many of the best games actually came from the unit based angle  and that is where I will take them.

For my own convenience, I will adopt what was once the universal 60mm  frontage for my own units,  largely because that will fit on my grid yet can will still work without a grid but any size and basing will work from card board counters to 24 individual models or anything else. Maneuver will be by groups but combat will be by unit. As much as I hate using little dice to mark hits, I will plan on it for now and limit the number of "hits" to a maximum of 6 per unit.

I have also decided to once again drop the activation dice, largely because I find that it works best with certain ratios of generals to troops, ratios I don't always find myself using. Instead I will rely on my standard initiative roll with Orders tests for units not in command etc.

Everything else will remain the usual as much as possible. 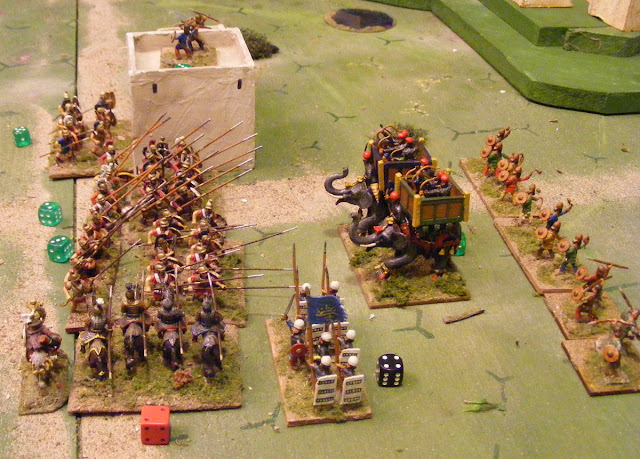 One of the small "unit" based games from last year that I enjoyed.


Posted by Ross Mac rmacfa@gmail.com at 8:30 AM