Fight For The Ford

It did not take long for the Federation scouts to find fords and begin crossing the river, but it was long enough for Sir John of Raven's Wood Tower, Captain of the Pass, to arrive with a detachment of the Black Guards. 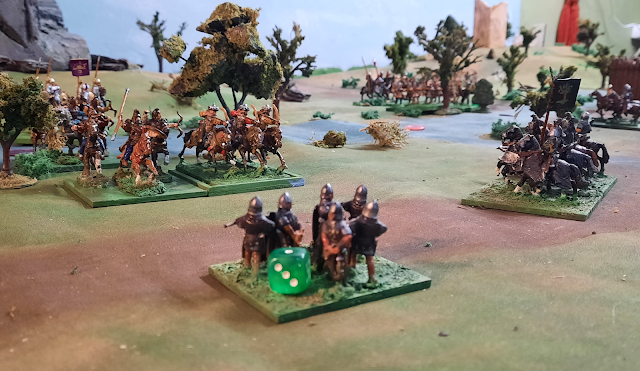 Sir John had led the detachment from the Black Tower to the Eastern Frontier as soon as word came from spies about the raid, but it was by chance that they arrived at the right place at the right time. The addition of a  company of heavily armoured knights supported by both mounted and foot crossbowmen was a major boost to the garrison and local levies but they were faced by twice their numbers of Federation Horse Guards and horse archers wading across the river.

At the main ford where the road crossed the river, 4 companies of archers, supported by the Horse Lord with two companies of lancers, began a long range duel with the two companies of local levies that defended the palisade. Two more companies of horse archers spread out to the south to look for a ford which would let them outflank the fort.

By the northern ford, the Black Company initially drove back the Federate light cavalry with heavy casualties, but they couldn't stem the flow of enemy cavalry entirely. Once the Horse Guards crossed over, their fierce charge drove the Black Company cavalry with heavy losses with the young Captain Theodora proving her ability to lead and to fight. 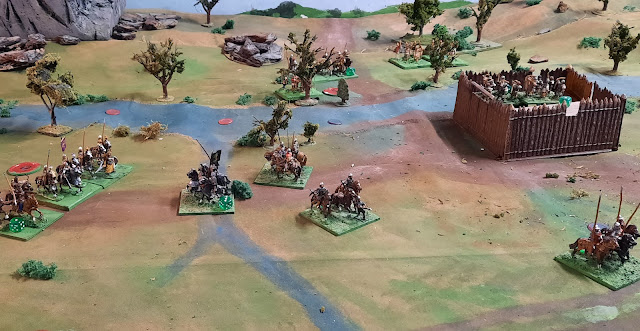 While the Black Company was holding back the upstream raiders, Lord Neville had arrived with his levies and driven off the Federate light cavalry who had crossed downriver. The garrison behind their palisade was slowly taking losses but appeared to be winning the exchange of arrows.
The sun was starting to slip for the horizon and it seemed like it might be possible to hold back the invaders till more of the local forces arrived.

The Horse Lord was not one to be easily dismayed though and he commanded a picked force. The assault was renewed with effect, sweeping away most of the remaining Midlish cavalry. There was nothing left for the defenders but to retreat behind their palisade and watch the raiders march past. In the woods to the north, the veteran Black Company crossbowmen did their best to form a rallying point for the surviving cavalrymen whose units had been shattered. When night fell, they retreated back through the woods.

The prolonged defence had been overcome with heavy losses, but it had slowed the raiders long enough to give the countryside time to prepare. The raiders would have to fight for their plunder!