The Host Gathers For The Raid

The talking is over. A plan has been agreed upon and the the raiders have mustered

The Valdurian component, led by the now recovered Prince Wyngnuht, is on the right as the eldest of the Federation. They are represented by one company of lancers and two of light cavalry. Two companies of the Federation Horse Guards are in the middle supported by a company of Dalish archers and two companies of Others from the mercenaries forces who guard the Great Pass which leads from Dale, past the Black Tower and into the heart of the Midlands. The Herdsman, with the largest force, form the left with 4 companies of archers, 4 of light cavalry and 2 of Lancers, 1 of which contains the Horse Master who has been given command of the expedition since he has the largest force. 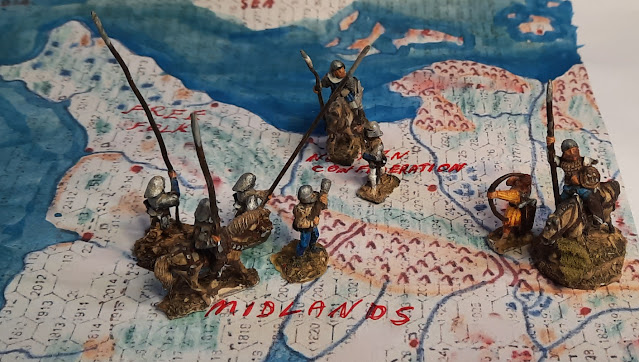 With the Midlish army licking its wounds behind the Black Tower, and the Free Folk still harassing the Midlish Northwestern border, it was thought best to flank the Midlish defences by moving swiftly through the East Pass into the debated lands and crossing the Great River that runs down to the Middle Sea before the East Marchers of the Midlands can muster and block the crossings.

The horns were sounded, and the march began.

Posted by Ross Mac rmacfa@gmail.com at 11:16 AM